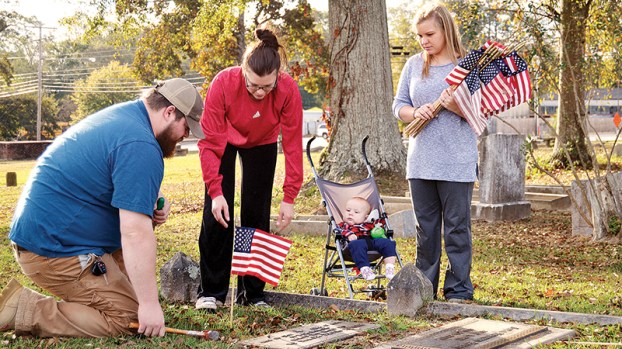 Daily Leader file photo/Families and individuals are encouraged to help the American Legion place flags at veterans’ graves at area cemeteries for Memorial Day. Volunteers are needed at 8:30 a.m. Saturday at Rosehill, Easthaven, Carver Heights and Hillcrest cemeteries. Pictured are, from left: Trey and Hannah Reid, of Caseyville, Colt Gatlin and Hope Gatlin.

To commemorate Memorial Day, members of the American Legion Post 12 and Veterans of Foreign Wars posts 4608 and 2618 are sponsoring two events.

The first is the placing of American flags on the graves of veterans on Saturday. Members of American Legion Post 12 will be placing the flags beginning at 8:30 a.m. at Rosehill Cemetery — which also includes Hoskins Family Cemetery and St. Francis of Assisi Catholic Cemetery. Other cemeteries included in the effort are Hillcrest, Carver Heights and Easthaven.

Because the group expects to place about 3,000 American flags on graves, volunteers are needed to help with the task. Individuals can show up at 8:30 a.m. at any of those cemeteries to help.

“It’s a pretty big job trying to get all these flags out,” said Post Commander Keith Reeves. “It would be so much easier if we had a lot of people show up to help out.”

Members of the two local VFW posts have joined together to spearhead this event.

“It’s the least we can do once a year,” said Army veteran Ken Powell, “to stop and bring attention to those who gave the ultimate sacrifice for our country.”

Monday’s ceremony will include the Pledge of Allegiance to the American flag led by a local Boy Scout troop, a reading of all the names on the memorial monument, playing of taps and the laying of a wreath on the monument  in memory of members of the U.S. armed forces who gave their lives for their nation.

Members of the auxiliary will provide refreshments following the public ceremony.

‘Thank you’ to teachers and parents

Thank you. These are two words not said nearly enough, according to Rod Henderson, assistant superintendent of the Brookhaven School... read more