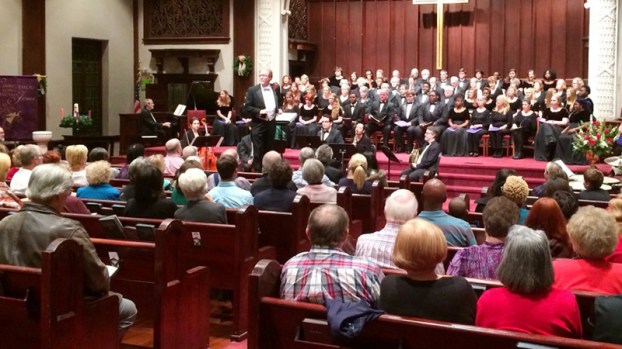 Photo submitted The Lincoln County Chorale will present “From Rutter to Rodgers and Hammerstein” Tuesday at 7 p.m. at First United Methodist Church.

Hymns and popular musicals will be the focus of the Lincoln County Chorale’s spring program.

The performance, entitled “From Rutter to Rodgers and Hammerstein,” will be Tuesday at 7 p.m. at First United Methodist Church.

Tickets for next Tuesday’s one-night-only performance are $5, and may be purchased at the door or in advance from any choir member.

The chorale, also known as the Lincoln County Choral Society, was formed around 2012 by several music-loving individuals under the leadership of Jens Oliva. At the time, Oliva was music minister at First United Methodist Church and choral director at Brookhaven High School.

When he moved out of the area, Patton Rice, an instructor at Mississippi School of Arts, took over directorial duties.

This performance, however, will be led by Cindy Hunter, who works with Rice at MSA. Organist Steve Russell is the accompanist.

The group performed along with MSA vocal students at Carnegie Hall in New York City in January 2016. A repeat trip is planned for this winter.

Wesson Board of Aldermen approve part-time hire for WPD

The Wesson Board of Alderman met quickly Tuesday night and approved three separate items on the agenda. Wesson added a... read more