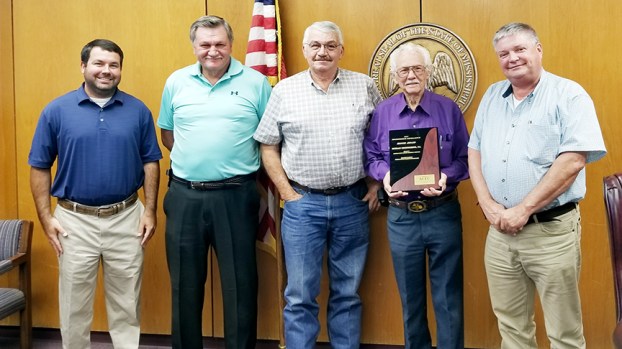 Several angry residents on Jakes Trail argued for better road conditions Monday before the Lincoln County Board of Supervisors.

Roland Robinson, who lives on Jakes Trail, said he was aware that at least one individual had submitted a letter to the board asking that the road not be maintained by the county as a public road. Robinson asked District 2 Supervisor Bobby Watts if that request was being honored, since it appeared no upkeep had been done on Jakes Trail in recent months.

Three people in one family had submitted a written request to make it a private road.

Watts’ confusion between Jakes Trail, a public road, and Greenwich Lane, an adjoining public road, led to some frustration for Robinson, who repeatedly explained his request to the supervisor.

Robinson wanted to know if all county maintenance on Jakes Trail had ceased. Watts raised his voice and continued to repeat his earlier statement that the board had voted and the letter had been added to the minutes.

“No, not to stop working on a road,” said Eddie Brown, supervisor for District 4.

“Is it up to the supervisor of that district to honor or dishonor that letter?” Robinson asked.

It was at this point that Watts seemed to understand the question was about Jakes Trail and not Greenwich Lane.

There has been a long battle between landowners over use of the road, which was a private road in 1992. It became public in 2002.

Robert Robinson asked if Watts was going to patch the potholes that were all over the road.

“I think the supervisor has said he’ll take care of your road,” he said.

“That’s not in the minutes,” replied County Attorney Robert Allen.

Watts said that he would make sure Jakes Trail was blacktopped as soon as possible depending on the weather, and that Greenwich would be fixed, but not blacktopped.

“He will maintain it,” said Allen, “Greenwich and Jake’s Trail.”

“Patch it and we’ll be satisfied,” Robert Robinson said.

Brad C. Davis, attorney with Jones Walker LLP, Jackson, the bond counsel for Lincoln County, discussed with the board a TIF (tax increment financing) plan for the development of Magnolia Place, the property at the corner of Hwy. 51 and Brookway Boulevard, next to the recently-developed area for Jeff Wilson Dodge.

Davis fielded questions from those in attendance, clarifying what the bonds would be used for and how they would be repaid.

He said the bonds would be used to pay for public infrastructure developments to the property only if and when a private developer decides to improve upon the specified property. As necessary, water and electrical improvements would be made. The county would be responsible for no more than 28 percent of the increased ad valorem tax from the developed property.

• On the recommendation of County Tax Assessor Blake Pickering, the board voted to enter into a two-year contract with CivicSource Property Auction to shift the sale of tax-delinquent properties to an online, rather than physical, auction. This would allow interested parties to bid online in a manner similar to other online bidding sites for the purchase of properties that have historically been auctioned at a physical meeting at the court complex. The county would have no additional expense to shift to this method, but will potentially save money in man-hours and paperwork.

• The board approved the refund of tax for years 2013 and 2014 on a property that had been combined from two separate lots, but was still being assessed for those years as two properties rather than one. The total refund was for $92.76.

• The board approved Pickering’s recommendation to have a private company print tag renewal notice cards rather than the state, since the cost per state-printed notice was about to rise from 29.5 cents each to 70 cents per notice. Cost per notice using the private printer is 33 cents.

• The board entered a 45-minute executive session on personnel hiring matters. No action was taken.

• The board approved a 10-year waiver of ad valorem taxes on newly-purchased equipment for Delphi-Packard, and a similar waiver for Rex Lumber Company.

• The board approved the monthly reimbursement to the city for lighting along the I-55 interchange in the amount of $461.33 for the month of May.

• The board approved re-appointing Mary Catherine Dickey for a five-year term as commissioner of the Mississippi Regional Housing Authority.

• The American Council of Engineering Companies of Mississippi recently presented the Honor Award and People’s Choice Award to Dungan Engineering of Brookhaven as part of the 2017 Engineering Excellence Awards. The award was for the Lincoln Civic Center Baseball Complex. During Monday’s board meeting, Ryan Holmes of Dungan presented a plaque from ACEC to the board of supervisors.

No charges filed yet in fatal weekend shooting in West Lincoln

A shooting Sunday in West Lincoln left one man dead, authorities said. A 25-year-old man was pronounced dead at the... read more