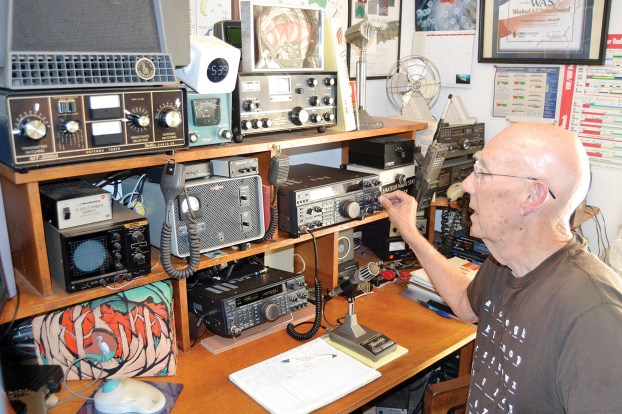 Photo by Donna Campbell/HAM radio operator Homer Richardson adjusts his settings to talk to other radio enthusiasts in other countries. A member of the Southwest Mississippi Amateur Radio Club, he will be participating in the annual 24-hour field day starting Saturday at the Brookhaven Recreation Department.

Member Homer Richardson said about 18 members participated in last year’s event, and he expects about the same to participate this year.

“All the members from our club and surrounding areas were there, plus some visitors we have from the public,” he said.

The point of the event is to try to set up and operate under emergency conditions for 24 hours and contact as many other radio operators in the U.S. and Canada as possible during that time, said Richardson.

Club members will use rechargeable and solar-powered batteries to keep their equipment running throughout the event.

The BPRD building will be filled with radios, microphones, antennas and computers, Richardson said. Members will set up 27 stations, plus some demonstration areas for equipment that may be interesting for some who want to know about ham radio.

Equipment will be run in voice mode with microphones and digital mode by being tied into a computer.

Richardson, 77, has been chatting with other amateur radio enthusiasts since 1959. He has participated in probably 45 field days in a variety of places from tents, parking lots, fields and other locations. The recreation department building is one of the nicer locations he has worked in, Richardson said. It’s a place to get under cover if inclement weather moves in.

“This is a real test of stamina, equipment and participation,” Richardson said, “like Boy Scout camping on steroids, with what I call cold hot dogs and hot ice cream.”

Club members will begin setting up equipment at 9 a.m. Saturday. They will also be available to administer ham radio licensing examinations at 10 a.m. Saturday for anyone who is interested.

Hundreds of group and individual stations will be set up across North America, with more than 40,000 ham operators participating, according to AARL statistics. The first Field Day was held in 1933, and the annual exercise remains the most popular event among ham radio enthusiasts.

When the 24 hours are up, equipment will be taken down and reports sent in to ARRL.

The Southwest MS Amateur Radio Club meets the second Thursday of each month at 7 p.m., alternating between Brookhaven and McComb. For more information, visit w5wq.net, or call Richardson at 601-833-4126.

When two Disney princesses met a Mississippi princess, loud squeals of delight echoed through the hall. And that was from... read more