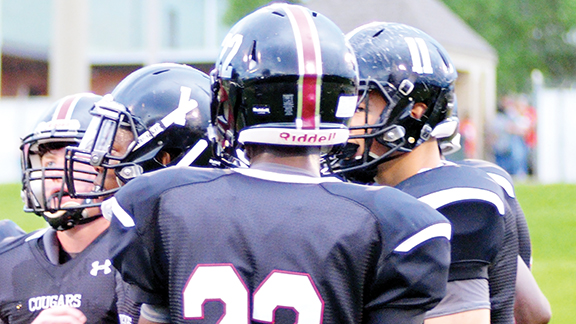 Rising senior tight end Kendarius Feazell of Lawrence County (22) runs into the huddle during a game played last season. Feazell is poised for a big year for the Cougars by switching from wide receiver to tight end. (File photo)

His older brother, KeyShawn Feazell, has already committed to play basketball at Mississippi State University for the upcoming school year. His father and uncle have both played on state championship basketball teams at Lawrence County.

“KeyShawn always tells me to keep my head on straight and to have a good mindset with everything,” Feazell said. “You can’t do anything without a good mindset. He motivates me to do better and to keep on working hard every day.”

Great size runs in the Feazell family as well. Kendarius stands 6-foot-3 and 180 pounds. His size and athleticism sets him apart from other athletes and this coming football season could be a coming out party for the rising senior.

“I’m excited for the opportunity this coming season,” Feazell said. “I just have to give it my all and do whatever it takes for my team to win.”

“He was a wide receiver for us last season, but we’re going to move him to tight end. He’s going to mismatch for other teams,” Lawrence County head coach Jaymie Palmer said. “We can do a lot of different things with him at the tight end position. He runs well and he has great hands.”

Last season, Feazell only reeled in 10 catches for 185 yards and one touchdown. The Cougars are loaded at the wide receiver and tight end position with Marcus Atterberry and AJ McLaurin getting most of the targets in the passing game.

Now as the top option in the passing game with size all around the receiving core, Feazell could put up big numbers on offense.

“We’re at least 6-foot-3 or bigger at wide receiver and tight end, so we’re going to have a big group,” Palmer said. “We’re long and athletic at receiver. We don’t have a lot of guys that can take the top off of coverage, but we’re coming with size led by Feazell.”

Feazell went through some adversity to make his way back on the football team. His sophomore year, Feazell was kicked off the football team for not being coachable and not handling discipline well.

Feazell changed his attitude to coaching and earned his way back to Palmer and the football team, playing a big role on the offense in 2016.

“When I first started playing, coach Palmer and I didn’t have a good connection,” Feazell said. “I didn’t handle coaching well at all. I came back and I learned so much from coach Palmer.”

While he sat out the rest of his sophomore season, Feazell looked at the big picture and realized he needed to change his ways in order to earn the trust of his coaches back.

The bond between the coach and the player grew even more and that relationship will continue to grow in Feazell’s senior year.

“I had to be disciplined. I used to be the guy that didn’t want to be coached,” Feazell said. “I came back more coachable and I became a better person because of it.”

“He’s become a great kid and a better athlete,” Palmer said. “If he keeps growing, he can have some junior colleges come look at him and give him a shot. He’s had a very good summer so far, especially in 7-on-7.”

With a young group of players coming in, Feazell is the lone senior in the wide receiver and tight ends group, but expectations remain big for Lawrence County.

“I believe we can make it farther than we did last year,” Feazell said. “A lot of younger guys are going to step up. We have a lot of good sophomores that can lead us to a good season. We just have to be coachable and to stay disciplined. We’re getting there.”

Making the Primetime 23 means a lot to Feazell, especially considering where he’s come from to get to this point.

“It’s an amazing opportunity. It feels great to be a part of this,” Feazell said. “I’m grateful that coach Palmer gave me another chance and believed in me.”

The Primetime 23 recognizes the 23 best football players for the upcoming season in the area. Lawrence County rising junior... read more