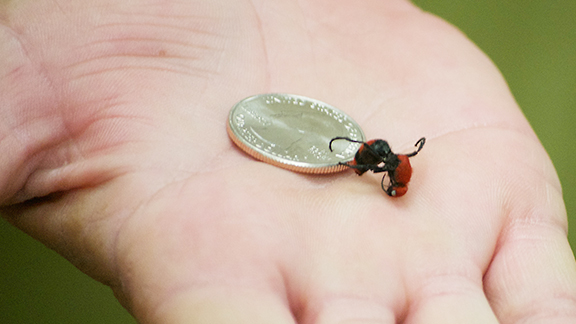 Photo by Donna Campbell/Rosa Harris of Wesson holds a preserved female Eastern red velvet ant specimen in her hand next to a quarter, to show the insect’s size. She found the insect in Wesson.

The Eastern red velvet ant — nicknamed the cow killer — is actually a wasp. The females are wingless, and so resemble a large hairy black and red ant, about 3/4 of an inch to one inch long.

Dasymutilla occidentalis do not live in colonies, but are solitary, which means don’t expect to run into a swarm of them. Be thankful for that. The sting of just one is enough to make a grown man cry or cause a sick cow to possibly keel over dead if stung, she said.

And they’ve been spotted in all 50 states. Onlyinyourstate.com claims it as its first pick on the list “These 10 Bugs Found In Mississippi Will Send Shivers Down Your Spine.”

The wasp’s nickname conjures up images of 1950s schlock horror movies, with a giant red and black creature climbing over the top of a high-rise building dwarfed by its size, with animals and people running away and a close-up of a woman screaming.

The nickname comes from an old legend that says the sting of one or two of them can kill a full-grown, healthy cow. Harris, a florist, said that story was what first got her attention when she learned about the wasp years ago. But she said the animal would have to already have a very weakened immune system for the wasp’s sting to kill it.

Harris, who lives in Wesson, is so fascinated by the insect that she chose “cowkiller” as part of her email address.

People who are stung should treat it like a serious wasp sting. A person who is in good health and not allergic to bee or wasp stings probably wouldn’t experience anything more than temporary intense pain, Harris said.

Dr. Gene Kritsky, an entomologist at Mount St. Joseph University in Ohio, said the pain would last about 30 minutes, and be excruciating.

“On the pain scale these have one of the most intense, painful stings that are out there,” said Kritsky. As Harris said, about 40 times worse than that of a yellow jacket.

Dr. Blake Layton, an entomologist with the Mississippi State University Extension Service, said the wasps are common throughout the state and are not really pests. But he agrees that the stings are rather painful.

“My wife has been stung,” he said, “and assures me it was most painful sting she ever had.”

Cow killers prefer sandy areas, pastures and the edges of woods. That’s where Harris said she found a cow killer on her Wesson property, in the edge of the woods. She has kept it for about 10 years in a bottle in her freezer.

“I always said I’d mount it and all, but never have,” she explained.

When her neighbor heard her talking about the insects and saw they one she’d found, he said he’d seen them on his land, too. He returned later with a larger cow killer he’d found in the edge of his woods. That one found a home in Harris’ freezer, too.

The wasps are seen more as the summer becomes hotter and the young insects are developing into adults, usually around August. The females are parasites of ground bees and wasps, laying their eggs on the larvae they find in ground nests. As their eggs hatch, the cow killer larvae eat their hosts. They eat nectar, avoid contact with people and are not aggressive unless handled or stepped on.

Although they have a “dangerous” nickname, the Eastern red velvet ant that is actually a wasp does not seek out bovine victims, nor human ones. It is an insect that preys on other potentially-dangerous insects by laying its young on top of theirs.

A thunderstorm that rolled quickly through Brookhaven Monday night brought with it damaging winds and some rain. Though not a... read more