‘Running is a lot cheaper than therapy’

Surgeon and physical therapist Ouida L. Brown believes running is cheaper than therapy. Born on a military base in Georgia and raised in Brookhaven, Brown is so committed to the idea that she’s written a book — “Running is Cheaper than Therapy: A Journey Back to Wholeness.”

After she graduated from Brookhaven High School, Brown moved away to begin her medical training. She received her doctorate in 2002 from the University of North Carolina at Chapel Hill. Brown was living in Philadelphia, Pennsylvania, in 2008, when she finished her sports medicine fellowship, and has worked in sports medicine orthopedic surgery at Mercy Medical Center in Chicago since 2013.

“My mother passed away in 2008 from breast cancer,” said Brown. “I was depressed, down, and I gained weight.”

Brown had been an occasional runner, but her mother’s death had hit her so hard that she no longer ran or exercised. She spent her time away from work eating, staring out of her window at the river and crying.

But through the encouragement of friends and a Christian counselor, Brown realized she could not go on like that.

“I had to get back to being me,” she wrote. “I knew that my mom would not want to see my like this.”

“I started running again,” she said.

Brown’s book tells her story of opening up to God as she ran, working through several injuries and eventually competing in several marathons.

“My book is a story of my life,” Brown wrote. “A story of my life in the darkest times, and how running was a vital part of getting my life back — how it helped me return to happy-go-lucky Ouida.

“Writing this book was empowering, as well as heart-wrenching. It brought back a lot of painful memories. I had to shed a few tears. The process was painful yet therapeutic. I had to overcome, and running was a part of the healing process.”

But Brown’s book is not just a story of what she has been through. She wants it to be helpful for others, as well.

Brown wants her story to help readers focus on their health from every angle, and believes running can be the avenue for others that it has been for her.

“It can be therapeutic for you as it was for me,” she said.

Brown’s book will release Aug. 7 and will be available on her Amazon webpage, amazon.com/author/ouidabrownmdpt. 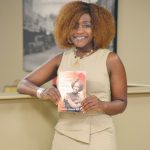 Photo by Donna Campbell/Dr. Ouida Brown hopes her story will inspire others to become healthy physically, mentally and spiritually.

How will Lincoln County supervisors decide which bridges to fix?

Q: How will Lincoln County supervisors decide which bridges need to be replaced or repaired? A: Quite a few bridges... read more