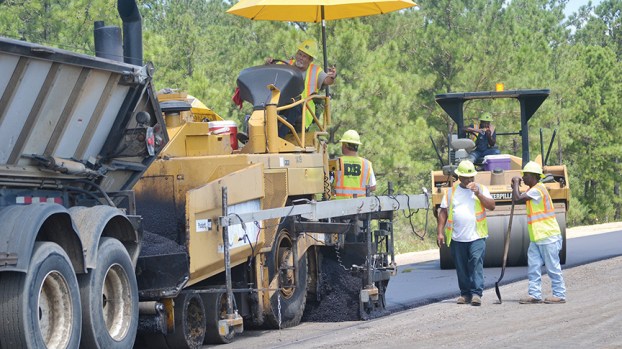 Eleven months ago, Lincoln County was awarded a $1.25 million grant from the Delta Regional Authority to repair three roads serving the Brookhaven Industrial Park. When the grant came through in August, the estimated cost of rebuilding and repairing Manufacturers Boulevard East, Manufacturers Boulevard West and Fender Trail was $2.7 million, according to Garrick Combs, executive director of the Brookhaven-Lincoln County Industrial Development Foundation and the Chamber of Commerce.

The difference remaining between the grant and project cost was to be split between the city of Brookhaven and Lincoln County, roughly $775,000 each.

The Brookhaven Industrial Park houses several businesses — including the Walmart Distribution Center — with about 1,500 direct jobs and 340 commercial truckloads a day, he said.

The entire project is expected to be completed by the end of September, Holmes said.

Dickerson & Bowen of Brookhaven is the contractor.

The first section to undergo rebuilding is Manufacturers Boulevard West.

Crews have scraped the existing roadway and will combine the scraped materials with concrete and soil before laying it back down as a subsurface for new blacktop.

Combs and Holmes applied for the grant in June, targeting the three roads because of the amount of traffic they experience every day, Combs said.

“We’ve had discussions about the deterioration of those three roads and it’s something that I think this board has targeted over multiple years with MDOT and trips to our congressional delegation,” Combs said in June. “We’ve had an opportunity to put this application together in order to receive assistance for the community to try to make upgrades to those three roads, and to support that many jobs and those many commercial trucks a day.”

The downtown summer concert series proved to be so popular that officials with Brookhaven-Lincoln County Chamber of Commerce plan to... read more