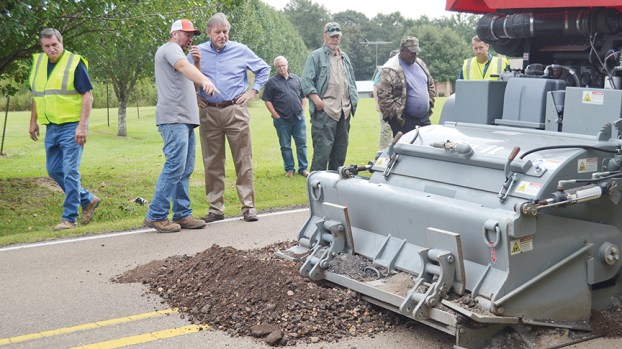 Lincoln County and Brookhaven officials on Tuesday watched as an asphalt repair machine dug in and ground up damaged roadway and laid the material back down as a base for new pavement.

The machine works as an attachment to the bucket scoop of a front loader tractor. It is used in road reclamation to grind up damaged portions of asphalt roadways and mix the ground-up material with soil and/or concrete, laying it back down as a base for hot asphalt or top coat to be poured on top.

Smoothing of the area is done with the bucket of the front loader and the rollers of a steamroller.

According to Asphalt Zipper representative Todd Howell, the repaved surface of a “zippered” road section will last until the length of road is resurfaced, saving up to 10 years of patching work.

Milling is the removal of just a portion of the top layer of an asphalt road to smooth it out and recoat it. Howell said the Zipper can mill a section as thin as one-half inch, and an internal bladder keeps the machine level so the milling will be smooth and even.

Using the machine on a portion of Jackson Liberty Drive a couple of miles north of Hwy. 550, a District 5 road crew ground and packed down a section approximately 35 feet in length in less than 30 minutes. Traffic was allowed to drive on the packed area almost immediately.

During the demo, Howell walked alongside the attachment to monitor gauges and show that no danger existed to him being that close as the machine worked. No debris was thrown from it, and cars were allowed to pass while it was in use.

Purchase of a 60-inch-wide Asphalt Zipper like the one used in on Jackson Liberty Drive would cost approximately $185,000. Upkeep cost is primarily in replacing the teeth of the grinder, which run $800 to $1,500 a set and would need to be replaced possibly monthly if the machine were used regularly, Howell said.

As an alternative to purchasing, the Zipper and an operator can be rented for $5,000 per day, with up to 1,000 feet of road worked. That works out to $5 per linear foot of roadway.

Supervisors David Sutherland and Mike Hunt of Franklin County were present for the demonstration.

“I’m impressed by it,” said Sutherland. “It’s expensive, but it’s cheaper than the traditional way to do it.”

Brookhaven Mayor Joe Cox and Ward 5 Alderman Fletcher Grice also watched the demo. County Engineer Ryan Holmes, who also works with the city of Brookhaven, said one of the dangers of using traditional milling equipment inside the city comes from the strong vibrations created from the machines, which can easily cause damage to buried water and sewer lines.

“You’ll get very minimal vibration from this machine,” said Howell.

Howell continued the demonstration for just over an hour on two sections of Jackson Liberty Drive, explaining how the machine worked and giving each county and city official plenty of time to examine it and ask questions.

“The county wanted to see how well this would work,” said Holmes.

Falvey said once he heard about the machine, he wanted to see if it would be something beneficial to consider. Neither the county nor the city has current plans to purchase or rent the Asphalt Zipper.

Each county supervisor has a budget for roads and a budget for bridges. The budgets are based on the number of road miles in each district and the number of bridges, with the proposed bridge budgets containing larger-than-typical amounts to offset the anticipated cost of replacing several over the coming fiscal year.

Following are the proposed road and bridge budget amounts for each district:

The Board of Supervisors will vote on the proposed 2017-2018 budget on Friday, after a 9 a.m. public hearing.