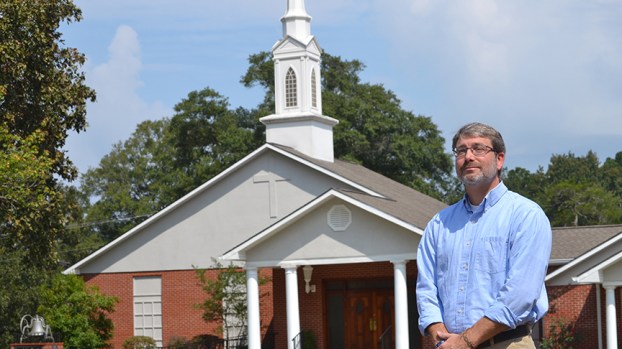 Photo by Donna Campbell/Rev. Chad Yarborough has been pastor of Friendship Baptist Church in Lincoln County since 2003. The church was formed in 1809.

Friendship: Church lives up to its name

One of the oldest churches in Lincoln County just marked 208 years since it was established.

Friendship Baptist Church is located at 1502 Friendship Lane, just west of the intersection of Zetus Road and Jackson Liberty Drive. Construction on the red brick building that stands there now was begun in 1959 and completed in 1960. It was built just south of where the original church building stood and where a newer church had been built in 1912.

The first written record of the church is from Sept. 10, 1830, when the 11 members of the church made a $1 “good standing” donation to the Pearl River Association to join with other churches in joint efforts like providing for Christian missionaries. The record said the church had been formed in 1809 and formed a constitution in 1818.

The members of Friendship held their first Bible class and prayer meeting in 1880. The Women’s Missionary Union was formed in 1929, and the first Vacation Bible School was held in 1933.

Rev. Chad Yarborough is the current pastor, and is son of Rev. Anthony Yarborough, pastor of Pearlhaven Baptist Church in Brookhaven.

Yarborough was called by the church to be their pastor in May 2003, but he said he’s felt at home since the beginning.

“I felt drawn by the hospitality of the people,” he said. “They were so welcoming and made us feel at home. The church had a wonderful reputation of caring for pastors and loving their pastors, and I have found that to be true.”

Yarborough is the 37th man to serve as pastor of Friendship since 1834. Prior to that time, traveling preachers known as circuit riders came through the area and the church hosted one for a weekend each month.

The longest serving pastor of the church was Wiley Reid, who retired after 27 years, prior to the church calling Yarborough.

Yarborough said, “Bro. Wiley has meant a lot to me and definitely served as a mentor for me.”

With an average Sunday morning attendance of 200 including children’s worship, the pastor said it’s been great to see the overall faithfulness of the members.

“Their faithfulness to come, to serve and put the interest of the church above their own really stands out to me,” he said.

“They have good leadership among themselves,” said Yarborough. “They are about community. They are faithful to the Lord, and the church and their families.”

The church cemetery contains the graves of slaves and slave owners, and some of the oldest graves have no surviving markers. One wooden marker remains, but is illegible. The oldest tombstone belongs to a woman who died in 1843.

Fifteen members of Friendship have become licensed to gospel ministry by the church and become ordained pastors of other congregations over the years. The 200th anniversary book published by the church in 2009 records that God selected each of their pastors “to lead the congregation at his appointed time, and they have all had a hand in shaping and molding not only this local body of believers, but the community, county and beyond.”

“Friendship lives up to the name,” said Yarborough. “It’s made a real impression on me and has encouraged, inspired and challenged me, as well.”

The oldest-known church building still standing in Mississippi is Woodville Baptist Church, built in 1809. The oldest Protestant congregation was the Jersey Settlers, formed in Adams County in 1772.