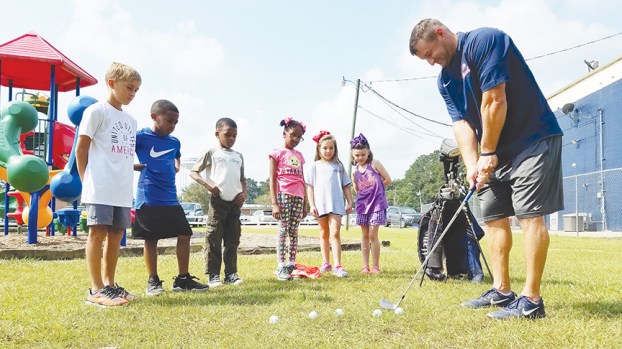 Mamie Martin going for a hole-in-one

School officials in Brookhaven are taking a swing at a program that aims to teach second graders discipline and good health through golf.

Through a partnership with Brookhaven Country Club, Mamie Martin Elementary will be offering a new program called The First Tee. It is an international youth development organization that focuses on introducing the game of golf and its values to youngsters.

“We’ll be one of the first schools to implement this in our area, in southwest Mississippi,” said Mamie Martin Elementary Principal Danny Rushing. “I know some school districts in central Mississippi and on the Coast have this program.”

The idea was introduced to him through the country club, and he is anxious to see this program get started and grow over the coming years.

“Our second graders will have the opportunity to learn about leading a healthy and active lifestyle through the basic skills of golf,” Rushing said. “We’ve talked it up some, and they seem real excited about it.”

The program involves exposure to the sport, first-hand basics of golf, as well as some good citizenship values and healthy habits, Rushing explained.

“You have some character education in there,” he said.

Roughly 260 students are enrolled in second grade at Mamie Martin. Participation in the golf program is voluntary.

Each second grade class has a maximum of 27 students and goes to physical education class once per week with coaches Corey McLaurin and Bobby Bass. The children in each class who want to participate will be allowed to do so during their regular PE time. Bass will lead the golf students and McLaurin will teach the rest.

Joe Louis Barrow Jr., chief executive officer of The First Tee, said the program is making a difference where it’s been implemented.

“Our research-proven programs are having a positive impact on participants, their families and their communities,” Barrow said.

Rushing said the program should be implemented within the second nine weeks of this fall semester. The program will be evaluated around the end of the third nine weeks to see if it is something that should continue. He believes the students will enjoy it and benefit from it.

West Lincoln Road needs work and some residents who travel it regularly want to know what’s being done to fix... read more