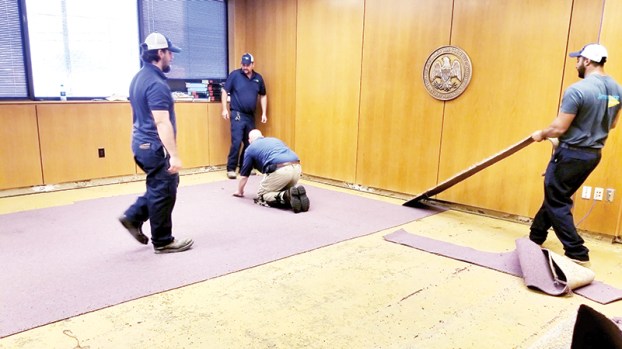 Photo by Brett Campbell/A Service Master crew Wednesday rips up carpet in the boardroom of the Lincoln County Board of Supervisors. A new desk will be put in so the supervisors can face the audience during meetings.

Renovation work on the Lincoln County boardroom has begun.

The boardroom in the Lincoln County Government Complex is used for a variety of meetings throughout the year, but most regularly for the county’s Board of Supervisors. The board holds regular meetings the first and third Mondays of each month at 9 a.m.

At one of those meetings earlier this year, the board discussed suggestions for changing the layout of the room to be more accessible during meetings.

Planned renovations for the room include replacing the worn carpeting with a more durable floor covering. Carpet was removed from the room by a Service Master crew on Wednesday.

But the primary work involves replacing the existing tables with an L-shaped desk, behind which the supervisors, chancery clerk, county administrator and county attorney will sit during meetings. The desk will sit on a raised platform, allowing the board to see the people who attend the meetings better. Chairs for the public will be placed in the room facing the desk.

The project is being completed by Herschel Adams at a cost of $6,700 to $6,800, said County Administrator David Fields.

Supervisors believe the new arrangement will benefit both the board and meeting attendees by creating a physical environment in which no member of the board has his back to the public, and people in attendance are able to see and address the board more easily.

In March, the board was presented with bids from two contractors who wanted to take on the task of renovation, but the supervisors unanimously rejected the bids as too costly. A public call for new bids was published, and the low bid for a general contractor was accepted.

Work began Tuesday with everything removed from the boardroom to prepare for flooring removal the following day. Fields said the carpentry work for the desk would take place at a workshop and the completed structure be installed in sections, in order to prevent damage to new floor coverings and other surfaces.

The total project is expected to take two to four weeks to complete.

If the work is not completed prior to the next scheduled meeting of the supervisors on Oct. 3, the board will move its meeting to another location in the government complex building. In that case, said Chancery Clerk Tillmon Bishop, the move will be publicized prior to the meeting.

Mississippi government agencies are seeking about $800 million more for the next budget year — roughly a 13 percent increase... read more