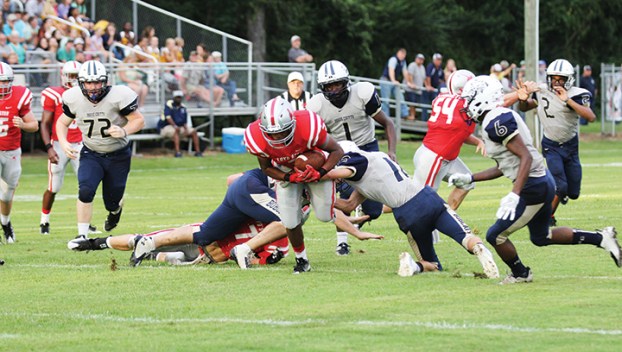 High school football is into week seven of the season as all eight local teams enter gridiron battles. This is also the first week of district play for some. All games have a kick-off time of 7 p.m.

In an annual rivalry born in 1984 — when then-head Loyd Star coach Roe Burns hung dead possums around the school and told his players Bogue Chitto had done it, in order to get them fired up to play — the Hornets (2-4) host the Bobcats (4-1) for the 33rd time Friday. Coach Garreth Sartin’s Bobcats plan to take that first district game for themselves. Though Loyd Star’s record comes from some hard-hitting losses, a traditional rivalry may be what the Hornets need to win on their homecoming night.

“Bogue Chitto has a very good team and their record shows how much improved they are this year,” said Loyd Star head coach Brian Ford. “We must do a good job tackling their skill guys. Executing well and not turning the ball over are keys for us to have success against them.”

Brookhaven will host its second district game Friday night against the Golden Tornadoes of Laurel. The Panthers (4-1) are 1-0 in district play, as are the Tornadoes (3-2). Laurel is ranked 20th in the state, but Brookhaven is ranked number 15. Panthers coach Tommy Clopton is eager to see how the Panthers handle this battle.

“Friday night is going to be a big game. Should be an exciting game,” Clopton said, via text. “We look forward to the opportunity to play against a team of Laurel’s caliber. They are the measuring stick in our district right now. Hopefully we will build on our success from the last few weeks.”

Brookhaven Academy (5-1) hits the road Friday to meet the Tigers of Centreville Academy (4-2) in the Cougars’ second district game. BA is 1-0 in district play, but it’s the first district game of the season for the Tigers. BA’s winning streak is up to five in a series of impressive wins for the team that went so long with nothing in the W column of the score sheets.

But Cougars coach Ron Rushing isn’t taking anything for granted in this head-to-head.

“It’s a district ballgame. It’s going to be our toughest test of the year,” said Rushing. “We’ll have to play well in all phases of the game.”

The Enterprise Yellow Jackets (1-4) come off their bye week to face the Mize Bulldogs (3-3) in a road game Friday. A season that started well for coach Brooks Burns’ Yellow Jackets with a win in overtime took a turn south as Enterprise subsequently lost their following games by an average of 27 points each, culminating in a 34-point loss at homecoming two weeks ago.

Mize, on the other hand, has both lost big in three and won big in three. The big difference is Mize’s statewide ranking of 172 has them in a league a stretch above the Jackets’ spot at 300. The Yellow Jackets will have to sting quickly, hard and often to keep the Bulldogs at bay in this matchup.

The Lawrence County Cougars (3-3) will host the Forrest County Agricultural Aggies (4-2) in both teams’ first district game of the season. FCA’s losses came courtesy of Perry Central and Hazlehurst. The Aggies’ wins have been by an average of 12 points. The Cougars have won their three with an average of 7 points per game, and lost three by an average of three touchdowns.

“They start counting now,” said Cougars coach Jaymie Palmer. “They have a strong team, coming right at you. We’re a little beat up. Our quarterback (junior Jerome Dudley) broke his ankle and is out for the year.”

“We’re banged up as bad as I’ve ever seen it,” Palmer said, “But we’ve got to push ahead. Nobody is going to feel sorry for you.”

The Wesson Cobras (4-2) are also diving into their first district game of the season, traveling to meet the Columbia Wildcats (2-3). Though the Wildcats are not boasting a winning season yet, their wins have been decisive so far, with a point spread as large as 33. Coach Jeremy Loy’s Cobras have played well, but Loy believes they’re facing a strong opponent Friday.

“It’s going to be a tough game for us. They’re a good ball team. They’ve got a good offense and on defense they don’t get out of line much,” said Loy. “We’re going to have to play really well to beat them.”

Loy hopes his offense will be a little better at blocking this week, giving senior Dell Thigpen and junior JaQuavion Harris some more running lanes.

West Lincoln (2-4) will host the Amite County Trojans (1-5) in the first district game of the season for each team. This is also homecoming for the Bears.

AC’s one win came against East Marion in the season opener, and their losses were each by large margins. Bears coach BJ Smithhart thinks that 1-5 record is a bit misleading, however.

“They are a big athletic team that has played a really tough schedule against bigger schools,” said Smithhart. “I look for us to play better and a big homecoming crowd that should make a really good atmosphere.”