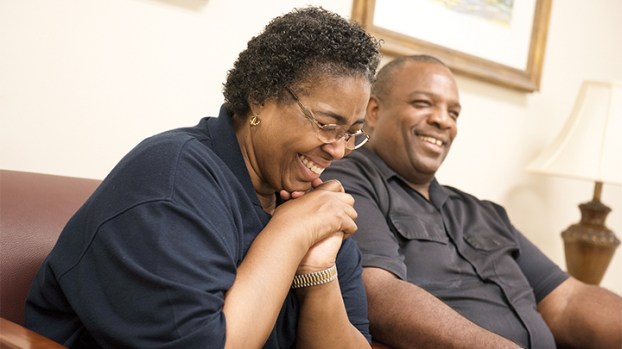 Helping others is as innate as breathing for David Franklin of Brookhaven.

Franklin, pastor of Christ Church International in Brookhaven, knows how important caregivers are and after years of bringing his wife and others he considers family to the University of Mississippi Medical Center, has too much practice in the role.

He cared for his wife, Edwina, through a brain aneurysm and two bouts with Stage 4 B-cell lymphoma.

Now the couple are helping care for two others in Brookhaven: Gloria Brown also is fighting her second battle with follicular lymphoma; Stacey Parker is battling Mantle Cell Lymphoma and preparing for a stem cell transplant.

Care provided by family and friends is crucial to a cancer patient’s recovery, UMMC Cancer Institute doctors say. And, the Franklins are exemplary caregivers, say medical staff who have worked with them.

Recently, the couple talked about their journey and the role caregivers played in it.

Most important, Franklin said, “Care has to be offered out of love and not out of responsibility. To be a real caregiver, you have to be loving and love has to be driven by something real and divine, Christ’s love. It pushes us to the max.”

From a professional standpoint, said Dr. Carter Milner, assistant professor of medicine and a hematologist/oncologist at the Cancer Institute, “Doctors see a difference in patients who have support and those who don’t.”

“Caregivers are important from a mental, spiritual and physical standpoint,” she said.

“Because of the Franklins’ journey they understand the importance of treating people like family and supporting them through a journey that is uncertain, thus providing consistency in their lives,” Milner said.

“The Franklins have taught me a lot about compassion and what it means to love each other,” she said.

Franklin’s role as a medical caregiver intensified in 2009 when Edwina suffered a brain aneurysm. Alerted by their daughter, one of eight adopted children, he flew home from a conference in Houston to meet Edwina who was flown from Brookhaven to UMMC.

“The doctor told me we’ve done all we can. He had papers for me to sign. I looked at her and walked over to her and told her to ‘wake up in Jesus name’ and she opened her eyes and said, ‘Hi Honey’ and it freaked the doctor out.”

Slowly, she recovered, learning to walk, talk and recover memories the aneurysm had disrupted.

In 2013, Edwina was diagnosed with Stage 4 lymphoma, was treated and went into remission. David was her chauffer, her rock, she said. Her sister, children, friends and church members helped at home.

“He was my best nurse. There is no one better. I am very grateful,” she said, touching his arm.

“We were in the hospital about every three weeks,” David said.

“It was not my duty but my joy to take care of her.”

But the lymphoma returned two years later and the couple faced a stem cell transplant. Transplants require about a 30-day hospital stay while doctors give medications to destroy the bone marrow then replenish it with new cancer-free stem cells.

Milner says a psychosocial evaluation is required before a transplant and caregiver support is a critical part of it.

David calls the transplant hard.  He told his church he would be with Edwina. “Chemo is so hard. Have your heart ready for the long haul. We depended on others to help. Some cooked, some cleaned.”

Illness brings emotional and physical stress to a caregiver, he said. “As a caregiver, I had to hold onto my Christian faith. And we had people to encourage us and pray for us.”

Humor helps too. “Many nights when I had to go sleep on a couch at the hospital, I’d say, ‘Lord I would like for you to give me a bigger couch.’

“The hospital got bigger couches. It happened the last day we were there,” he said, as he and Edwina laughed.

• Ask for help when you need it.

Tasting the Trust, and winning in Brookhaven

The single, most popular bite at the annual Taste of the Trust this year was a lamb and chickpea stew.... read more