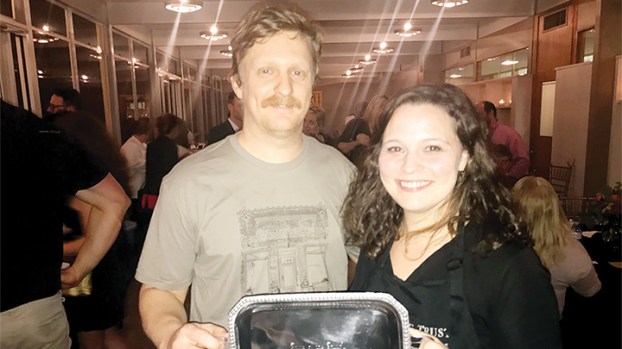 Tasting the Trust, and winning in Brookhaven

The single, most popular bite at the annual Taste of the Trust this year was a lamb and chickpea stew.

That burst of Mediterranean flavor earned Matt Fitzsimmons of Betty’s Eat Shop the People’s Choice award, which was given at the annual fundraising event hosted by the Trust of Brookhaven.

Betty’s was in the running with at least 20 other restaurants which each created an amuse-bouche for the occasion.

He received an engraved silver platter to display.

The event held at Ole Towne Church Nov. 16 serves as a fundraiser for the Trust. More than 400 tickets at $35 to $40 were sold, Miller said.

The Trust also receives sponsorships for the fundraiser. The silent auction is always popular as well and adds more funds to the collection.

The money raised helps the Trust fund projects that fits into its mission of historic preservation and the cultivation of the arts in downtown Brookhaven.

The project will allow for a second sound booth for the Black Box Theatre as well as two additional classrooms. The anticipated cost of the project is $191,000, Miller said.

The third floor completion will enable MSA to have needed space to adequately serve students and finish renovation on a building that began in 2008.

Over the past year, the Trust donated a $25,000 check to the Brookhaven Little Theatre and provided funding for MSA’s current project to add a mural on campus.

Trust of Brookhaven began in 1991, when a group of like-minded individuals joined together to create the organization as part of the effort to save Mary Jane Lampton on the historic campus of Whitworth College. Twenty-six years later, the organization returned to its roots with this year’s Taste of The Trust.

Membership in the Trust is always welcome. Meetings are held quarterly and there are no dues.

For more information call the Brookhaven-Lincoln County Chamber of Commerce at 601-833-1411.

The principals of Thanksgiving — Area principals share memories and recipes

Scott Merrell, Bogue Chitto Attendance Center When The Daily Leader asked me to send them a favorite recipe and story... read more