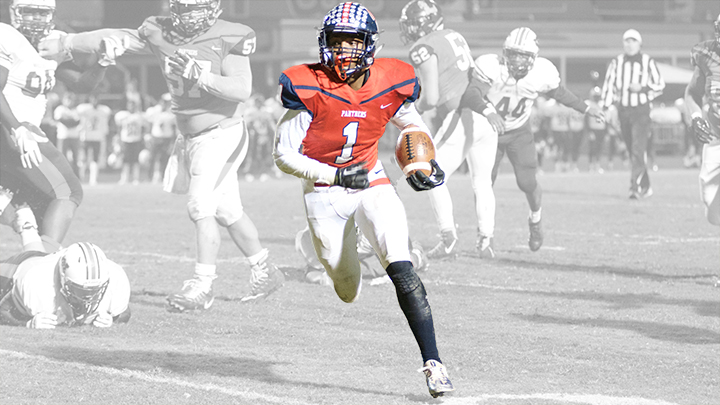 Photo illustration by Adam Northam/Ole Brook senior running back Damarrell Leggett gets into the open field against Wayne County in the first round of the 5A playoffs last year. Leggett is the MVP of The Daily Leader’s 2018 All-Area Football Team.

The plan all year was for him to carry the ball. The plan never changed.

The Brookhaven High School Panthers leaned hard on their senior running back in the thick of their 11-game win streak in 2017, and that’s why Damarrell Leggett is the Most Valuable Player on The Daily Leader’s 2018 All-Area Football Team.

“It was a great season. Being in the backfield last year was amazing,” Leggett said. “I feel like I experienced a lot, and it was the best season I ever had.”

Leggett was a reliable weapon for the Panthers in 2017, good for a first down every two rushes at 8.2 yards per carry. He carried the ball 187 times for 1,525 yards and 21 touchdowns, scoring 138 points on the year to become the team’s leading scorer by far.

He was at his best in dire moments. With running partner J.Q. Edwards nursing an injured knee in the final games of the season, Leggett strapped the offense on like a backpack and carried his team to victory.

In a close playoff win over Wayne County, Leggett rumbled 28 times for 223 yards and four touchdowns. He rushed for more than 100 yards eight times.

“I was getting tired, but I knew I had to suck it up,” Leggett said. “I felt like I had to step up, to keep moving forward. I was trying to help my team get to the state championship.”

Leggett praised his offensive line, saying he knew he would have holes to run through each game, no matter the opponent, and played with confidence that he and junior quarterback Sevante Quinn would be protected.

Brookhaven coach Tommy Clopton said any college that signs Leggett will get a great football player.

“Football season is long and grueling, and Damarrell was able to overcome some minor injuries down the stretch,” Clopton said. “He was at his best in the biggest games of the year.”

In our perfect football world, the coach who would oversee Leggett and The Daily Leader’s 2018 All-Area Football Team would be Brookhaven Academy coach Ron Rushing.

Rushing was chosen as the newspaper’s Coach of the Year because of the Cougars’ incredible turnaround in 2017, where the bad taste of two previous, winless seasons was washed out by nine wins, a trip to the postseason and a high-flying offense that ate up more than 4,500 yards.

“It’s an honor, and it’s a reflection of my team and the hard work they’ve put in,” Rushing said.

Rushing said the journey from defeat to victory was a mental one, and it required creating a positive atmosphere that rewarded work, not victory.

“The first year was just trying to survive, to pull out all the effort and let these guys know it’s OK not to win, but to play hard and give it everything you have,” he said. “I let them know you’re going to play to the last play of the year, and I’m going to coach to the last play of the year. We kept preaching to our guys, God’s laid a path for us, and we’re going to carry it with honor and do what we’re supposed to do.”

With the work ethic in place, Rushing was able to attract talented athletes at BA who weren’t into football — including his eventual starting quarterback and leading wide receiver, both of whom were named to The Daily Leader’s 2018 All-Area Football Team. Hiring BA alumnus Will Gatlin as assistant coach was also a critical move for last season’s success, he said.

“I told the guys, ‘We’re going to coach you up and do it the right way. We’re going to learn and have fun, and the biggest part is we’re going to do it together,’” Rushing said. “And 2017 went better than I thought it would. I was expecting four or five wins, not nine. It was unexpected to turn it around as fast as we did. Now, our expectations are to play for a championship next year.

“Our mindset has gone from not winning a game to, ‘Hey, we’re fixin’ to do something special,’” he concluded.

Rushing also thanked the BA community, saying the fans’ support was the same for 0-10 as it was for 9-3. He said none of it would be possible without his wife, Kappi, allowing him to put in the hours necessary to turn a football program around.

If Rushing could put in the hours to coach The Daily Leader’s 2018 All-Area Football Team, it would be a sight.

The following players were named to the newspaper’s team using a combination of factors, including their coaches’ recommendations, their season statistics and the value they brought to their teams.

Offensively, BA junior quarterback Dawson Flowers would lead the team. Flowers had a banner year floating up the pigskin, completing 157 passes for 2,419 yards and 26 touchdowns.

Flowers would throw to one of his own, BA junior wide receiver Cade Brown, who hauled in 67 receptions for 1,103 yards and 14 touchdowns. West Lincoln senior Chase Owen would line up on the other side at wide out. The Bears’ battering ram played several positions in 2017, but it was at receiver where the 6-foot-3 Owen was most dangerous, grabbing 34 passes for 628 yards and five touchdowns.

Supporting Leggett in the run game would be Loyd Star senior Patrick Price. Described by Hornets coach Brian Ford as the team’s “workhorse,” Price carried 125 times for 943 yards and a dozen scores last season. He was moving along at 7.5 yards per carry before an injury cut short his season.

Southwest Mississippi football teams do a lot of running, so the newspaper football team would need a third running back. Though he’s the quarterback for the Wesson Cobras, senior Dell Thigpen ate opposing defenses’ lunch on the ground, rushing 184 times for 1,213 yards and 13 touchdowns.

Leggett, Price and Thigpen would need a good offensive line to clear the way, and local football teams have plenty of linemen equal to the task.

Finally, every offense needs a do-it-all athlete, and that’s Lawrence County senior Kendarius Feazell. Feazell moved all over the offense for the Cougars last year, rushing 72 times for 396 yards and eight touchdowns, completing 26 passes or 392 yards and three touchdowns and catching 10 passes for 222 yards and six scores.

The Daily Leader has no doubt its picked team could move the ball on anyone in Mississippi. We’ve selected a fine defense, too.

Outside linebackers would be Bears — West Lincoln’s junior Cam Buckles and senior Gabe Nations. Buckles wrapped up 84 ball-carriers and dragged down the quarterback twice, while Nations tackled 75 runners and got the quarterback 2.5 times.

In the middle would be Loyd Star junior Jared Smith, who totaled 71 tackles, one sack and one forced fumble.

Region 7-2A’s special teams player of the year is a good fit on the newspaper’s team. We want West Lincoln sophomore Michael Brothern returning kicks — last year he ran back nine for 375 yards and three touchdowns, including a long of 98.

If any of The Daily Leader’s 2018 All-Area Football Team catches the flu, there are a few honorable mentions we’d move up to the active roster.

Some English lessons for haters