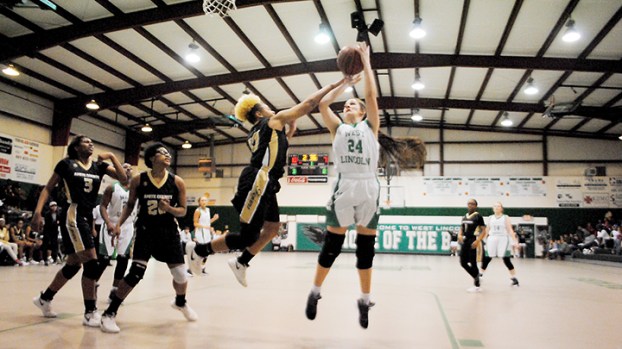 The West Lincoln Lady Bears coasted to a 65-37 victory over Amite County Tuesday night, getting out front early for a carefree second half.

The Lady Bears heated up in the second period, taking a 20-point lead to halftime and coming out hot in the third quarter to take control of the game. The West Lincoln girls sat on a 30-point lead at the start of the fourth quarter, and the game was already won.

“Overall, I thought the girls played well. We made a lot of shots and got off to a good start in the first half,” Lady Bears coach Brooks Smith said. “We built on that in the second half. We need to work on doing a better job at rebounding, and we’ll work on that. Overall, I was pleased with the way the girls played.”

The game started off with ties and lead changes. Halfway through the first, the Lady Bears started to gain momentum, leading 14-9 going into the second period.

The she-bears offense heated up in the second period, as they separated themselves from the Lady Trojans to lead 35-14 at halftime.

West Lincoln pressed the court hard and fast in the third, and didn’t allow Amite County to get off many shots. They led 50-20 going into the final period.

Although the Lady Trojans tried to get shots to sink in the final period, the Lady Bears were in total control. By the time the final buzzer sounded, West Lincoln won by a final score of 65-37.

West Lincoln will be in action Friday as they take on Enterprise.

Amite County will also be in action Friday, as they play against Bogue Chitto.

Bears go down in overtime against Amite County

Amite County limped away from West Lincoln Tuesday night with a 57-56 victory after needing overtime to get past the... read more