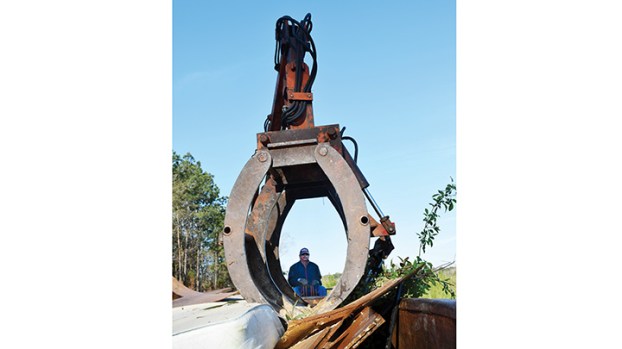 The Ford’s big diesel throttled way down low when he shut off the crane. It had taken several pinches from the mechanical arm’s big jaws to extract the old TV display center from the illegal dumpsite on Forest Trail Wednesday morning. It was made of particleboard, and shattered beneath the compression of the closing steel mouth.

Lincoln County Litter Control Coordinator Bob Knight climbed down from the bucket seat and picked his way carefully into the deep ditch, holding onto privet limbs and stepping over new spring briars, sharp as cut glass. He cleaned up the smaller pieces of litter by hand — a pair of cabinet doors and a homemade DVD.

He wiped the grit off the disc and read the label, hand-written in black ink.

“It says, ‘Time Travel Wife.’ Is that some kind of movie?” Knight asked. “I don’t watch movies.”

“We ‘gone find out,” he said, mouth curled in a grin and eyebrows high.

It is unclear what was on the DVD. The possibilities are endless, and exciting.

Whatever it may have been, Knight said he always searches through the illegal dumpsites he’s called out daily to clean, looking for any kind of clue he can pass on to the sheriff’s department in hopes of identifying the dumper. Mississippi’s litter laws fine first-time offenders between $50 and $250, but Knight said the most common result in the few cases he’s been able to prove is deputies talk to the dumpers, give them a scare and make them help clean up.

Of course, deputies don’t have a lot of time to chase litter cases, and county leaders would prefer folks just not litter in the first place. Next month, Lincoln County will hold its single greatest tool for combating litter and illegal dumping — the annual Great American Cleanup, a five-week program that allows citizens to get rid of old furniture, run-down appliances and other hard-to-dump items for free at designated locations.

“We host the Great American Cleanup to give people an opportunity to dispose of their rubbish without dumping it in the creeks and down dead-end roads,” said Lincoln County Administrator David Fields. “We just don’t want illegal dumps all over the county, so this is a way to drop off that junk for free.”

The GAC will rotate through each of the county’s five districts on five separate weekends, with huge, industrial trash bins placed at each location from Thursday through Sunday.

People are encouraged to use the GAC to dispose of items the garbage men won’t always pick up — old mattresses, furniture, appliances, carpet, wood waste and personal tires.

The GAC will not accept commercial waste or commercial tires, and will not accept hazardous materials like paint, oil and other chemicals. Fields said the county has applied for a grant from the Mississippi Department of Environmental Quality in the $20,000 range that will be used for a special hazardous waste collection day to target those items, but it is unclear if the county will get the money.

Fields also said no scavenging will be allowed.

“It’s going to happen anyway, but we’ll at least say it. Stay out of the dumpsters,” he said.

This will be the first year the GAC has been conducted without its longtime masters — former Keep Lincoln County Beautiful Chairman Homer Richardson and former litter control officer Ronnie Durr, now both retired.

The GAC will run just the same, but Keep Lincoln County Beautiful has gone inactive until a new leader can be found. Also missing are the annual litter surveys Richardson and Durr conducted through KLCB as part of local membership in Keep Mississippi Beautiful.

Richardson has some older surveys posted on his website at homerrichardson.com/klcb that show county litter levels, district by district, trending downward sharply over an 11-year span from 2002 to 2013. KLCB first began the surveys in 1998.

There’s no question the GAC will be a success in 2018 — it always is — but without an active KLCB organization and annual litter surveys, it will be impossible to really know if Lincoln County is becoming more or less littered.

“It really comes down to a culture, a ‘we don’t throw mess out in our backyard’ kind of thing. We still have some areas that are pretty bad in terms of people not really caring about litter,” Richardson said. “There’s just so much of it, and Lincoln County has so much area to cover, so many roads. It’s difficult to keep up with.”

Durr, who retired from the county after 19 years as litter control officer, said the GAC has been a great success for Lincoln County and believes it will continue to be. He hopes to see KLCB revived and, like Richardson, pointed out that litter control is a game of culture and publicity.

“It’s a never-ending thing of staying with it. You can’t drop your guard not one second,” Durr said. “Trash does not end on one day.”

Putting your best foot forward at the Pathways Job Fair could land you a spot with a local, regional or... read more