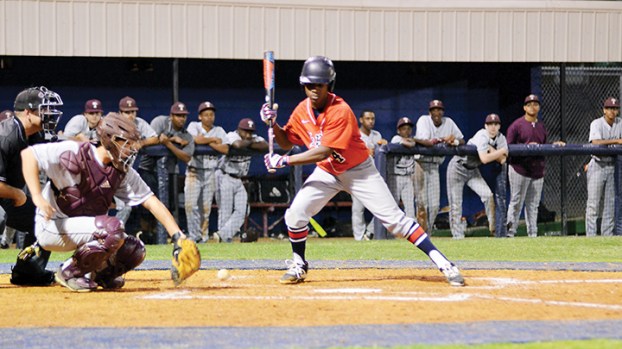 Photo by Dave Linton/Brookhaven junior pitcher/outfielder Sevante Quinn holds back on a bad pitch during the Panthers’ Saturday victory over Terry.

Playing at Moyer Field Saturday, the Brookhaven Panthers came out on top of Terry, 11-1.

Five innings is all the Panthers needed to finish off the Bulldogs. After getting an early lead, Brookhaven added seven runs in the fifth inning to secure the victory.

“We had practice every day after spring break, so in my opinion that helped us out,” said Panthers Logan Emfinger.

Terry could only muster up one hit and one run against the Panthers in the first inning. Senior Tyrek Pegues got on base off a single, and later scored off a pitch that got past Brookhaven’s catcher.

The Panthers loaded the bases in their half of the first and scored two runs. Senior Trace Owens was hit by a pitch, bringing in the first run for BHS. Junior Corbin Falvey brought in the second run on an RBI sac, before Terry could get out of the inning.

Behind his defense, Quinn was able to keep the Bulldogs off the bases throughout the game.

“I knew before the game that I was feeling good,” Panthers senior Sevante Quinn said. “That was the best I have felt since Oak Grove. I knew I was going to have a good game pitching and my defense made plays behind me.”

Brookhaven added two more runs in their half of the third. The Panthers scored on a pitch that sailed past Terry’s catcher. Emfinger brought in a run on a RBI sac.

Leading 4-1 in the fifth inning, Ole Brook scored seven runs. Brookhaven scored one run off a pitch that got away from the Bulldogs catcher and scored another one off a pitch that sailed past Terry’s first baseman.

Emfinger finished the scoring, and the game, for Brookhaven on a RBI single.

“Terry scored first and that got on our nerves,” Panthers coach Matt White said. “We just stayed within ourselves. Sevante threw a heck of a game for us and we made plays behind him.   We beat a very good ball club.”

Emfinger had two singles and two RBIs. Sophomore Byrion Robinson had a single. Walker had a single and a RBI. Falvey and Owens finished the night with an RBI each.

Quinn — going five innings, with one hit, one unearned run and nine strike outs — picked up the win for the Panthers.

Brookhaven will start 5A-6 regional play today, as they host Wingfield for the first game of a three-game series. Games two and three will be at Wingfield Friday.

Training days for one of Brookhaven’s biggest sporting leagues is only a week out, but plenty of time remains for... read more