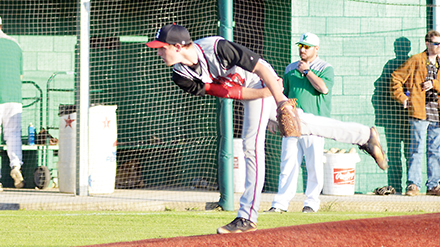 Photo by Collin Brister/Loyd Star junior pitcher Dane Smith punches in from the mound Tuesday night in the Hornets’ victory over West Lincoln.

West Lincoln’s bats fell flat throughout the game tallying only two hits, whereas the Hornets had 15. Loyd Star jumped out in front early and effectively ended the contest in the fourth inning when they scored six runs to gain separation.

“It was a great win, and I don’t think we can be stopped,” Loyd Star junior Dane Smith said. “Defensively we played great and didn’t make any errors.”

In the top half of the first, Hornets junior James Beard led off with a walk. Senior Cade Hodges followed with a single. Loyd Star scored the first run of the game on a RBI sacrifice by Smith.

Junior Logan Smith followed with an RBI single. With one out and runners on the corners, junior Rails Hester brought in the final run of the inning on a sacrifice.

Smith faced four batters in the first inning, striking out two batters and giving up a single to West Lincoln senior Kylar Fielder before getting a ground ball out to end the first inning.

“We started the year off strong on the bats, everyone was doing their job,” Loyd Star senior Cade Hodges said. “We fell off a little bit in some of our games. I think around the Amite County games we started heating back up. If we all hit together as a team, I think we’ll be just fine.”

Loyd Star scored one run in their half of the third as Hodges led off with a solo home run. The Hornets got a base runner on board as Logan Smith doubled with one out. The Bears were able to get out of the inning only surrendering the home run.

Beard kept the hitting going for the Hornets with a single. Hodges followed, blasting a three-run home run, giving him two home runs for the game. After the next two batters walked  junior Dylan Case hit a RBI single.

Loyd Star loaded up the bases and get one run in before West Lincoln was able to finally escape the inning.

The Hornets finished off the game in the top of the fifth scoring four runs. Dane Smith got the scoring going with an RBI single. Loyd Star scored their final three runs with back-to-back RBI doubles by Logan Smith and Case, shutting out the Bears 14-0.

“I felt like the boys came out and played with a little bit more intensity than we have been playing with,” Loyd Star coach Jared Britt said. “Our bats had been sluggish the last few games, but tonight they came out really hot. I think it all contributes to their intensity level and their preparations throughout this week. They had their mind set that they were ready, and we know we have a chance of winning district if we sweep. Right now, that’s our mind set. Win one game at a time and work to be district champions.”

Dane Smith started for the Hornets and picked up the win.

Fielder started for the Bears and took the setback on the rubber. Senior Gabe Nations pitched in relief.

Junior Gavin Burris and Fielder each had a single for West Lincoln.

Loyd Star and West Lincoln will finish off the series Friday at Loyd Star, with the first game starting at 5 p.m. Loyd Star claimed the district championship outright with a double-header sweep April 6.

I’m excited to be here, to tell the stories of your athletes

I’m the new sports editor here at The Daily Leader, so you’ll likely see me out at the high schools... read more