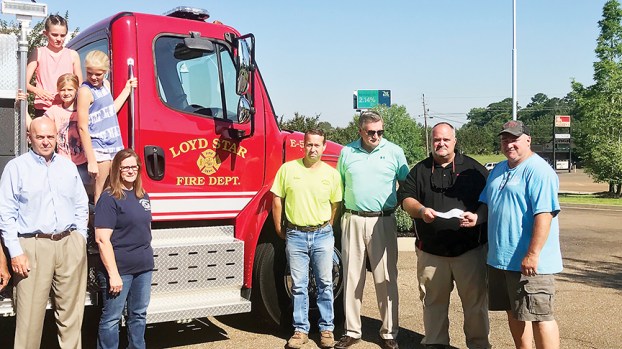 After running the same truck for the past 19 years, members of the Loyd Star VFD felt that it was time for some new wheels on the road.

The newly-purchased fire truck allows the department to be classified as a Level 7 department instead of Level 8, which in turn will lower insurance rates for residents.

“Loyd Star was just recertified as a Class 8, and this truck will give them what they need to get down to a Class 7,” Lincoln County Emergency Management Director Clifford Galey said. “They couldn’t have done that without this new truck. The older truck was about to run out of the time frame, and this new truck will help lower the insurance rate.”

The funds for the truck were raised solely by donations and from members of the department. They received no funding from the state or county for the purchase.

“The volunteer fire department is doing great,” Galey said. “This truck is being purchased totally by the fire department, and they’ve been able to get some donations and they’ll be able to pay the note. Any time any of our departments can get a new truck, it helps with our rating.”

The truck has an upper mount, which allows fire fighters more access to the scene.

“It’s going to help us with the top mount,” Loyd Star Chief Adam Tanksley said. “We’ll be able to see our guys on the scene a lot better. We don’t have to be facing a certain way.”

The truck can carry a driver and two additional firefighters to a fire.

“This wasn’t funded with any types of grants,” Tanksley said. “We had to go get an actual loan for this.”

Donnie Weeks of Bonaventure Fire and Safety presented the truck to the department at a ceremony at Bank of Franklin in Brookhaven.

The family of a young woman killed earlier this week will pay tribute to her Friday at Lawrence County High... read more