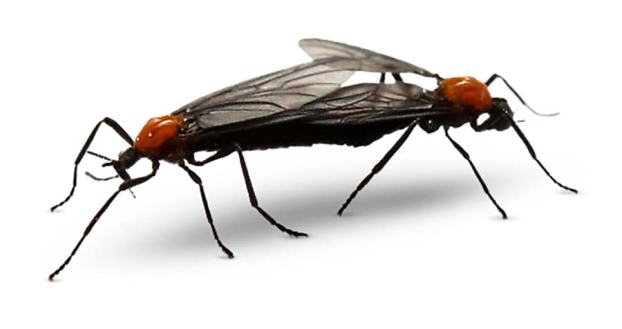 No love for this bug

Southerners, especially those in Lincoln County, have no love for Plecia nearctica.

You know the pest as the lovebug, a species of fly found throughout the state, but especially in southern counties. According to the Mississippi State University Extension Service, there are two generations each year, one in late spring and another in early fall. It’s the latter that’s causing headaches for motorists right now.

According to science, there’s no good way to control their numbers. They breed over such large areas and in such numbers that it would not be feasible to prevent outbreaks, according to the Extension Service. But each “flight” of lovebugs lasts only a few weeks.

The myth-busting website Snopes put to rest the idea that lovebugs were created by a genetic experiment gone wrong at the University of Florida. The truth is that the insects are native to Central America and probably hitched a ride to the United States on a ship around 1920.

The fly is harmless to humans. It can’t sting, bite or transmit disease. It is not poisonous.

They can be harmful to your vehicle’s paint, however. The Extension Service offers a few tips on getting their decaying bodies off your car.

“Because decaying insect bodies tend to break down auto paint finishes, it is a good idea to wash the critters off of automobile surfaces regularly,” Blake Layton, Extension entomology specialist, wrote. “One method is to wet the surface and allow the smashed insects to soak for a few minutes before washing with soapy water.  Repeat as needed. Not surprisingly, there are many other home remedies for removing lovebugs or preventing them from damaging car finishes.  Folks who live in lovebug country often find hood deflectors to be helpful in reducing the number of these and other insects that accumulate on the windshield, and they help preserve butterflies.”

Lincoln Countians have their own ideas for cleaning them. Greg Waldon wrote on Facebook that wet dryer sheets will work. Heather Williamson had the same suggestion.

Others on Facebook suggesting the dryer sheet method were Melissa Diane Cardwell Thompson and Sheila Stafford Burd. Greg Waldon noted that it’s the only thing he’s found that works. Darlene Granger Stewart agree with the dryer sheet method, and added that Awesome Orange cleaner works, also, but shouldn’t be used on glass.

The insurance company Nationwide recommends the dryer sheet trick, too. It suggests soaking the front of the car in water and applying a light layer of baby oil. Then, scrub with a wet dryer sheet, rinsing often and using new dryer sheets as needed. Finally, clean off any leftover residue and rinse well.