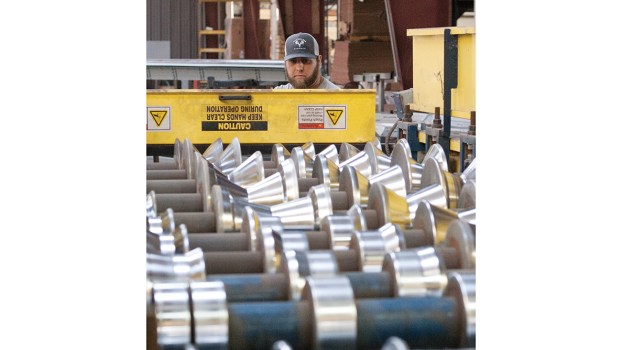 One of Lincoln County’s biggest businesses has been sold to an investment firm that plans to continue expanding it across the nation.

A deal transferring majority ownership of Reed’s Metals Inc. to Industrial Opportunity Partners, LLC was finalized on Oct. 31 for an undisclosed amount, ending a 20-year run of the business under the direct management of founder and CEO Bernie Reed. Reed, who retains some ownership in the company, said he will continue to oversee the operation of Reed’s Metals, which will keep on doing business as usual in Brookhaven and six other locations around the South.

“I don’t think anyone will notice a change in Brookhaven,” he said. “We’ll continue to offer the same great service to all our customers, and I’m still going to be putting in a lot of hours here. It’s my baby, my legacy.”

IOP, a private equity firm based in Evanston, Illinois, specializes in acquiring industrial manufacturing and distribution companies — last year it bought 72-year-old steel company Union Corrugating Company — and investing in their expansion. The firm has committed nearly $1 billion to similar acquisitions since it was founded in 2005.

By buying Reed’s Metals, IOP moves into a market for metal roofing and steel buildings that reaches 800 miles across the heart of the South, with manufacturing and sales facilities operating in Brookhaven and Tupelo; Benton, Arkansas; Cross City, Florida; Jackson, Tennessee; Scott City, Missouri; and Sulphur, Louisiana. An eighth store is planned to open in Texas in the near future.

Reed’s Metals employs 118 workers at the Brookhaven headquarters and 287 across the company. The business was founded in rural Lawrence County in 1998.

“It’s an attractive model, a very established brand in the market with excellent customer service, delivery and quality,” said Dave Mackin, an operating principal with IOP. “Those are definitely some of the attributes that really drove us hard to continue the pursuit of this acquisition, along with a very strong leadership team in place at each Reed’s Metals location. It’s a sound investment for us, really a tribute to what Bernie and his partners have built over the years.”

Reed said he’d passed up other acquisition offers before for fear his employees would not fare well in the deal. Under IOP’s umbrella, employment benefits will improve, and Reed’s partners who run the other six stores, like him, will continue on in their roles with the company.

“All my partners will become millionaires in this deal, and some of them are still in their 30s. That’s a really cool thing,” he said. “That’s one reason I couldn’t pass up this deal. I’ve turned down other offers because I was afraid they’d have been devastating to my employees, and I’ve got some longtime employees who’ve been here for 20 years.”

With IOP in charge, Reed will split his time between Brookhaven and the rest of the nation.  In addition to overseeing the Reed’s Metals operation, the firm also plans to use him as a high-level location scout, determining the best areas for new locations in Texas and further west.

“Really, the only major change is I have to answer to someone now, and I haven’t done that in 20 years,” he said.

The sale was made. It was a done deal. The buyers drove away after a handshake from Reed’s Metals owner... read more