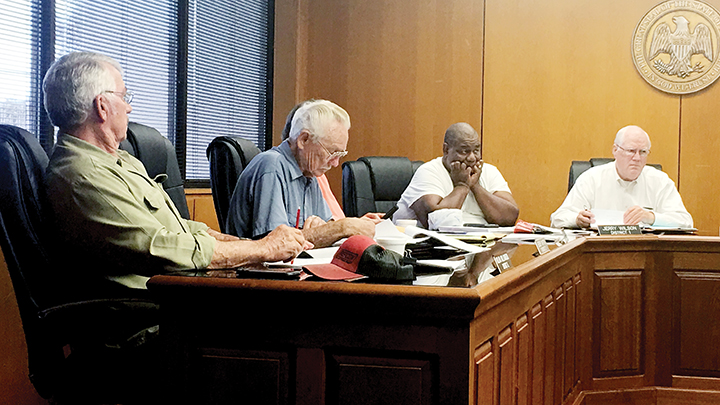 County supervisors have ordered a half-day session of on-the-job training for themselves, and they are calling in every department head and manager in county government to do the teaching.

Supervisors on Monday requested all county department chiefs and elected officials prepare a presentation on their duties and get ready for a Q&A session with the board after deciding they needed to know more about the operations for which they are responsible. Supervisors made the call after a lengthy discussion on a recent state audit that slapped Lincoln County officials with numerous red flags for bad accounting, improper reimbursements, bid law violations and other findings.

“I’ve been here a long time, and this is the first time I’ve ever known about some of this,” said District 3 Supervisor Nolan Earl Williamson, tapping his finger against a copy of the audit. “We have no idea when paperwork comes in, when it goes out, what was said — we don’t know until after the fact. Everything we do, we do on someone’s recommendation.”

Williamson wrapped his knuckles against a Dec. 13 special compliance report by the Mississippi State Auditor that found 26 violations in the county’s accounting and payment methods during Fiscal Year 2017. The report makes recommendations to correct the errors, and several are stiff — the auditor wants supervisors to reimburse the county $1.6 million for four years’ worth of improper insurance payments and for Lincoln County Chancery Clerk Tillmon Bishop to pay back more than $200,000 for improper payments and expenses for his office staff.

Bishop received the brunt of last month’s report, though investigators also chastised the board for numerous bookkeeping errors and failing to approve certain expenses. District 5 Supervisor Doug Falvey had previously warned the board about what he perceived as its failure to monitor the details at a lower level.

“Reading over this (audit report), everything points to us,” Williamson said. “This is something I want to discuss, because we have no idea.”

Williamson started the discussion as the board began filling its one-year appointments, a usually rapid and mundane task that sees the county engineer, attorney, administrator, purchasing clerk and other agents reappointed in a five-minute vote the first meeting of every year. The board went on to renew its appointed personnel unchanged, but not before making clear its right to make adjustments later

“A position can always be changed by the board of supervisors,” said District 4 Supervisor Eddie Brown. “But if you decide to replace someone, who are you going to replace them with that knows what they know? You don’t have a bunch of county attorneys running around here. How many administrators do we have in Lincoln County who are qualified to do our bookkeeping? It’s just not a wide field for replacement.”

Falvey said the question wasn’t about qualifications, but willingness.

Falvey suggested inviting someone from the state auditors office to the training session, but District 1 Supervisor and Board President the Rev. Jerry Wilson said he and another supervisor had already met with someone from that office. It is unclear when the meeting was held or who attended. The board went into a short executive session for possible litigation at the end of Monday’s meeting — closed-door talks have been routine since the board found out it was under fire from the auditor late last summer.

Falvey also suggested the board have more meetings to discuss the county’s issues. The board traditionally meets on the first and third Mondays of each month, sets an early-month docket meeting and joins up as necessary for bid-openings or special-called meetings.

“We just need to be together when we come to these meetings, and right now we’re not together as a team,” Falvey said. “(Today) is the same agenda we have every meeting — I don’t know how you can run a $20 million business with the same agenda. The things we need to discuss are not being discussed. It’s come to the point where we need to change things, get it under control.”

Wilson agreed, and asked Bishop to get “everybody in this courthouse” to attend the board’s upcoming information session.

“The buck stops right here,” he said. “The auditor told me we don’t have an excuse — we’re supposed to know what’s going on.