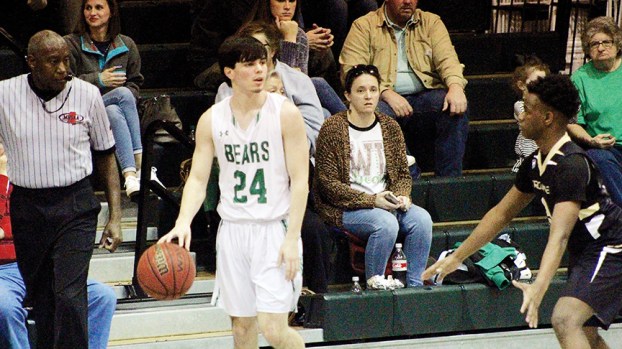 It started with one Keshon Byrd slam and it ended with another one; in between those plays the West Lincoln Bears (10-7, 1-0) captured their first region win of the season with a 69-60 victory over the Amite County Trojans.

On the first play after the tip 6-foot-4 junior center Byrd cut to the basket for right handed slam that had the Bear faithful on their feet inside Jack Case Gymnasium. Things were easy early for West Lincoln as the Trojans began the game in a man-to-man defense that the Bears easily dissected.

Flex-cuts led to layups and WL senior guard Garrison Coffey nailed two 3-pointers as the Bears jumped out to a 24-12 first quarter lead. Coffey finished with a game high 22 points.

As good as things were early for the Bears, in the second quarter Amite County slid into a 2-3 zone and the WL offense subsequently lost its flow.

“The first quarter looked great and in the second quarter we weren’t aggressive on offense and we didn’t do our jobs on defense either,” said Bears head coach Brooks Smith.

Amite County went on a 15-3 run that saw them tie the game at 27-27 with three minutes until halftime and just a minute later they had taken their first lead of the game. The Trojans led 31-29 at halftime, but Coffey answered with a 3-pointer on the first WL possession of the third quarter to put his team back up.

Amite County kept things close throughout the third quarter as West Lincoln held a 48-46 lead after three quarters. On the first possession of the fourth quarter the Trojans tied the game at 48.

In the second and third quarters West Lincoln had lapses of sloppy play that led to too many turnovers and easy Amite transition baskets. Late in the game the Bears buckled down and took care of the rock to run their offense.

Junior guard Anthony “Peanut” Hughes hit a fourth quarter 3-pointer that gave his team confidence. Hughes was also fouled behind the arc later in the quarter and calmly knocked down all three free-throws.

West Lincoln also got a boost in the final minutes from the play of junior forward Michael Brothern. Brothern gave his team a shot of energy as he converted a steal with a layup and free throw after getting fouled on the drive. That play put West Lincoln up five points and would end up being the sequence that fended off the final Amite County rally. A subsequent Kehson Byrd slam on the last WL offensive possession of the night — his third of the night — was the cherry on top of the Bear win.

Karlton Byrd finished with 17 points for West Lincoln. Keshon Byrd scored 11 points and Brothern finished with 10 points and seven rebounds. Hughes scored nine points as the Bears won despite getting zero points from their bench.

West Lincoln has won five of their last six games with a three-point loss to Madison-St. Joe as the only blemish during that run. Tonight, they travel to Enterprise for another region game and host Loyd Star on Friday.  On Dec. 4 in the county tournament West Lincoln defeated Loyd Star 63-54 in the first matchup between the teams.

Brookhaven High finished up the first leg of division play soccer on Friday when they hosted the Forest Hill Patriots... read more