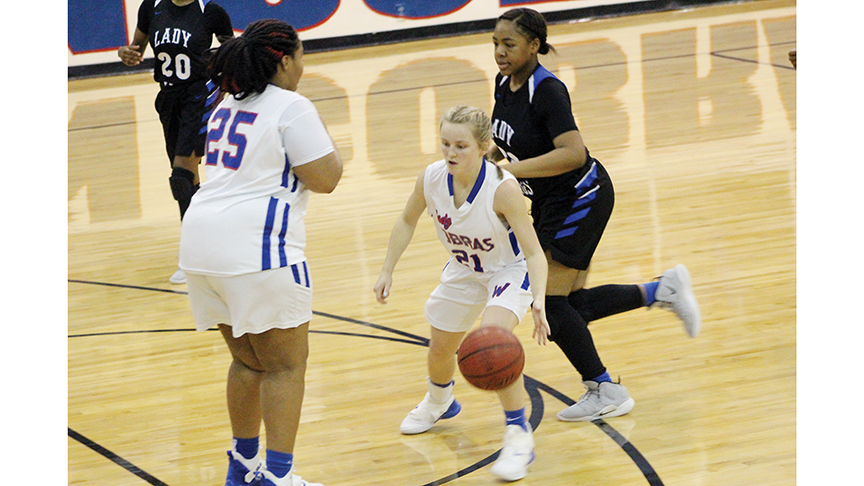 Photo by Cliff Furr Wesson guard Shelbi Maxwell works off the screen set by Destiny Vaugh (No. 25) on Tuesday against Jefferson Davis County. Wesson is on the road Friday when they travel to play West Marion in Foxworth.

Jefferson Davis County head girls’ coach Tony Woody has the luxury of subbing his players in and out five at a time with little to no drop off in production. On Tuesday night the Lady Jaguars crashed over the Wesson Lady Cobras in waves on their way a 75-36 win over the Lady Cobras.

Jeff Davis jumped to a quick lead but late in the first quarter the Lady Cobras began to chip away and had pulled within 22-12 with possession of the ball early in the second quarter. The Lady Jags would respond with a 12-3 run as they led 34-19 at halftime.

In the second half the depth of JDC began to show as Woody was able to routinely switch five for five more fresh players. Synphanie Berry — a 6-foot center — was especially strong for Jeff Davis inside as she scored 18 points with many of them coming off of offensive rebounds.

Freshman forward Ki’onna Gibson has been out of action with an injury of late for Wesson. That’s limited the rotation used by Lady Cobra coach Michelle Nunnery.

“Ki’onna being out has hurt us,” said Nunnery. “She’s played very well for a freshman this season.”

The Lady Cobras have a big region game on Friday when they travel to West Marion. West Marion is like Wesson in they are a team hungry for a win. They Lady Trojans were beaten 60-35 by Jefferson Davis a week ago. Tipoff in Foxsworth is set for 6 p.m.