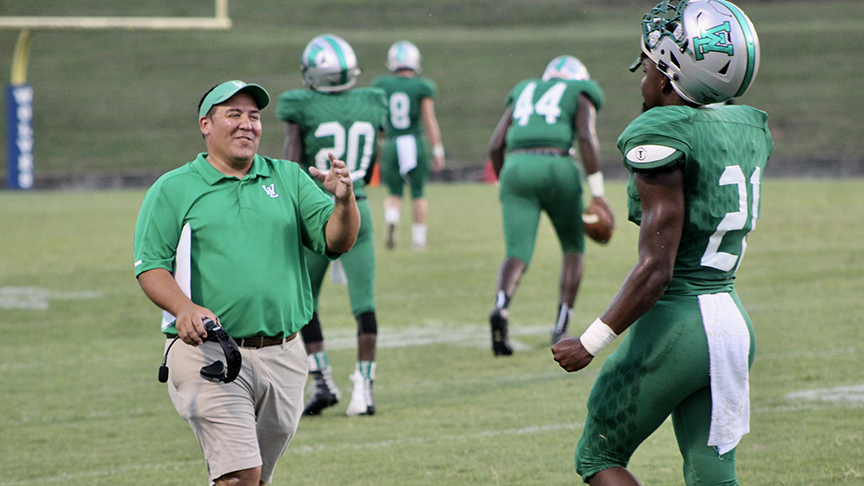 Photo by Cliff Furr/B.J. Smithhart greets West Lincoln running back Michael Brothern on the sideline in a 38-28 win over Salem. Smithhart was hired by Franklin County on Tuesday night after leading West Lincoln to a pair of playoff appearances from 2017-2018.

Franklin County did not look far for their new head football coach, just 23 miles to the east to be exact. On Tuesday night the Franklin County School Board approved the hiring of West Lincoln head coach B.J. Smithhart to be the next leader of the Bulldog football program.

“We’re excited to get a coach the caliber of B.J. to lead our program,” said FC athletic director Brent Calcote. There were 56 applicants for the position according to Calcote, but Smithhart’s experience and resume stood out.

“B.J. is a coach that will builds community support and connects with his players,” said Calcote. “We can’t wait for him to get to work.”

In his first season at West Lincoln the Bears finished 5-6 and hosted a playoff game for the first time in school history. Injuries hampered West Lincoln in 2018, but the Bears still made the playoffs despite their 3-8 record. His eight wins over two years is second all-time at the school behind Willie Brumfield who won 12 games over three seasons.

Before coming to West Lincoln Smithhart spent nine years at St. Aloysius in Vicksburg. A native of Warren County, he compiled a 54-54 record that included a trip to the MHSAA 1A state semifinals and a 2013 appearance in the 1A state championship game where the Flashes were defeated by Cathedral. He’s also worked as an assistant at Stone County High School and his alma mater, Warren Central.

“The history and tradition at Franklin County speaks for itself,” said Smithhart. “Everyone knows how good they’ve been in the past and what people in the community expect from their team.”

There was already familiarity with Franklin County as his wife Krystal has been a math teacher in Meadville since Smithhart made the move to West Lincoln from St. Al. Krystal Smithhart is about to begin her first season coaching fastpitch softball at FC. His son Ellis has been in school with Krystal in Meadville. Smithhart also has a daughter named Landry.

He replaces Trey Woodard who was hired at Franklin County in 2016 and finished 5-7 his first year. The Bulldogs finished with identical 1-10 records in 2017 and 2018. FC has not had a football coach stay longer than three seasons since Michael Goff coached the Bulldogs for 24 years from 1977-2001. For many years the job was handed off from one coach to another and the program maintained a high level of success. Two of the biggest schools in the state in Tupelo (Trent Hammond) and Madison Central (Anthony Hart) currently have coaches who have previously led the Franklin County program.

Smithhart will be tasked with bringing the program back in a Region 7-3A that also includes Hazlehurst, Jefferson County, Port Gibson, and Wilkinson County. Franklin County made the playoffs each of the last two seasons despite winning only one game as those victories came in region contests that qualified them as the fourth-place team.

West Lincoln returns one of the most experienced teams in the area in 2019 as they lost only four seniors last season. Returnees include a pair of 1,000-yard rushers in rising senior Michael Brothern and rising sophomore Enrico Price. The Bears will also have one of the most experienced offensive lines in their region anchored by a pair of 300-pounders in Grant Jackson and Jackson Taylor. Jackson, a rising senior, has already had visits from Mississippi State head coach Joe Moorhead and Ole Miss head coach Matt Luke this week.

Smithhart was hired to lead West Lincoln after a tragic set of circumstances created the opening. Former Lawrence County assistant Justin Sawyer was tabbed to replace former WL coach Charlie Jackson, but Sawyer passed away weeks after being hired. Smithhart was picked to lead the Bears just a month later.

“I can’t say enough about the kids at West Lincoln,” said Smithhart. “Telling them I was leaving today was very tough, but I didn’t know if I’d ever get a chance to be hired at Franklin County again and I think they understand that. The kids at West Lincoln are second to none and the administration is awesome. Mr. Shows (West Lincoln principal John Shows) is the best principal I’ve ever worked with.”

Smithhart is also bullish on the Bears in 2019.

“I told them that I really believe this coming season is going to be special for them and that made leaving even tougher,” said Smithhart. “They’ve worked their tails off and I told them to keep putting in the work so they can reap their rewards.”