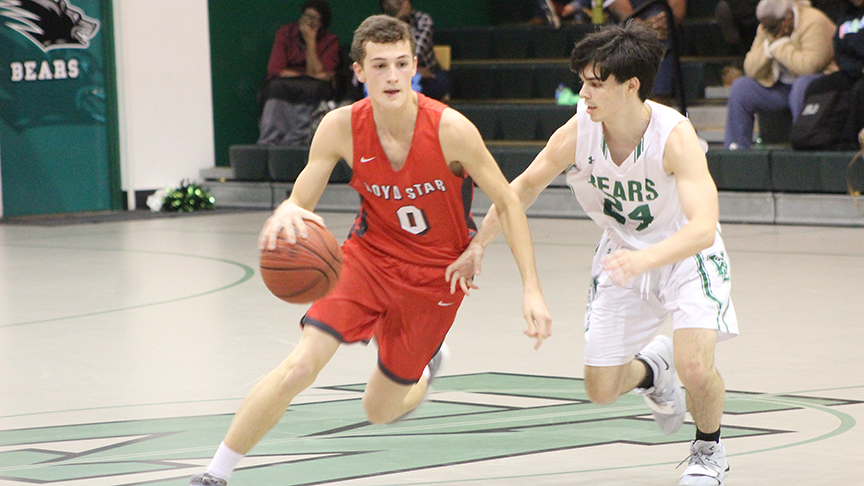 The season for coach Seth Britt and the Loyd Star basketball team has been about making adjustments. There have been lineup adjustments and offensive adjustments for the first-year coach and his team. On Friday night Britt and the Hornets (12-7, 3-0) made in-game adjustments on their way to a 62-59 win over West Lincoln (11-8, 2-1).

Earlier this season at the county tournament the Bears beat the Hornets 63-54 in a game that was won when they outscored LS 15-4 in the final quarter.

Early Friday it looked like it was be much of the same as West Lincoln jumped to a 20-10 lead. WL senior guard Garrison Coffey was bombing deep 3-pointers and junior forward Keshon Byrd was a force in the paint. Byrd had a powerful slam in the first quarter that looked like he was trying to rip the rim off.

Byrd would lead the Bears with a team high 14 points, but three first half fouls would put him on the bench and allow Loyd Star to make their move. Without Byrd in the middle of the WL defense, the Hornet offense found success with drives to the basket.

The big Loyd Star run cut the WL lead to 30-28 at halftime. In the third quarter you could see the Hornet attack continue to probe the WL defense with drives to the basket and their offensive confidence kept growing.

When Loyd Star has been their best this season they run half court sets with moving parts that get one of their ball handlers a drive to the basket. Senior forward Zabien Price is big but doesn’t often play inside.  6-foot-3 junior Peyton Morse and 6-foot-4 senior Gabe Netterville are subs off the LS bench with size, but for the most part the Hornets get it done with little inside scoring.

Their leading scorer — senior Dane Smith — is averaging 15 points per game, but only scored six points on Friday night.  West Lincoln leading scorer — junior Karlton Byrd — scored zero points on Friday night. Byrd and his 16 points per game were in sweats on the bench, wearing a walking boot after a sprain suffered earlier in the week against Enterprise.

Loyd Star had built a 49-38 lead after three quarters but had to fend off a West Lincoln comeback attempt that saw the Bears cut the lead to one point twice in the final minute. Both time the Bears got close the Hornets hit free throws to hold the lead. Calcote hit a pair with 16.2 seconds left to make the score 60-57.

West Lincoln would again pull within a single point on two made free throws by Briar Hamilton that made the game 60-59. Loyd Star would then ice the win when junior guard Reese DeHart sank a pair of free throws that provided the final score.

“We started attacking the basket after the first quarter and taking the ball to the goal,” said Britt. “Jett was a big part of that and getting our offense rolling.”

Calcote says a defensive change led to some easy buckets that gave the Hornets the boost they needed.

“We went to a man-to-man defense in the second quarter and that led to some fast breaks that gave us momentum,” said Calcote. “We’ve gone through a kind of cold streak this season where things weren’t going so well, and I feel like we’re starting to come together now.”

“This was kind of a mirror of our game against Amite County last week,” said Smith. “We get up early and then we lollygag and lose our flow. Loyd Star really took it to us in the second and third quarters and we didn’t respond until we were down late.”