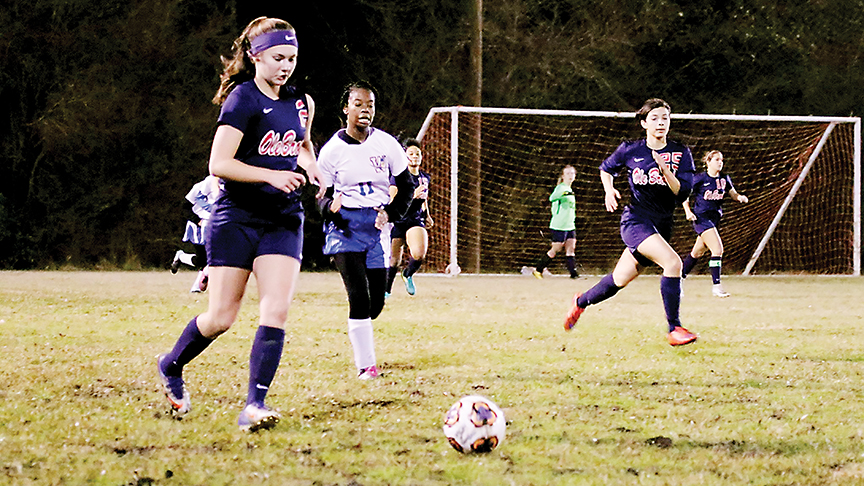 Photo by Terri Mabile Brookhaven High junior Madi Miller controls the ball earlier this season against Wingfield. Miller scored three goals on Tuesday as BHS clinched the Region 6-5A championship with a 9-0 shelling of Forest Hill. BHS will host West Harrison at the Hansel King Sports Complex on Tuesday, Jan. 29 in an opening round playoff game.

The Lady Panthers (8-7-1) now move on to the opening round of the MHSAA 5A state playoffs. Coach Kevin Bower and his squad are winners of nine straight as BHS has begun to gel at the best possible time.

Senior goal scorer Kat Wallace once again posted a hat trick for BHS as she scored three goals in the win against Forest Hill. Junior Madi Miller also stayed hot with three goals of her own. Layla Woodall, Zoe Conner, and Layton Roberson all scored one goal apiece for BHS in the win. Goal keeper Maddie Brabham picked up her fifth shutout of the season.

The Lady Panthers next face West Harrison on Tuesday, Jan. 29 in the opening round of the playoffs.

“I’m really proud of the progress our girls have made this season,” said Bower. “We had a rough start, but we worked hard to play together as a team. It’s been a great season and I’m going to miss our seniors.”

On the boys’ side Forest Hill took a 6-0 win over the Panthers (5-10-1) to end the season for BHS. It was the youngest team that head coach Aaron Ayers has put on the field since he took over the program.

The Lady Panthers will host the Lady Hurricanes at the Hansel King Sports Complex on Tuesday. BHS was forced to move their games to the Sports Complex midseason after drainage issues forced repairs to King Field.