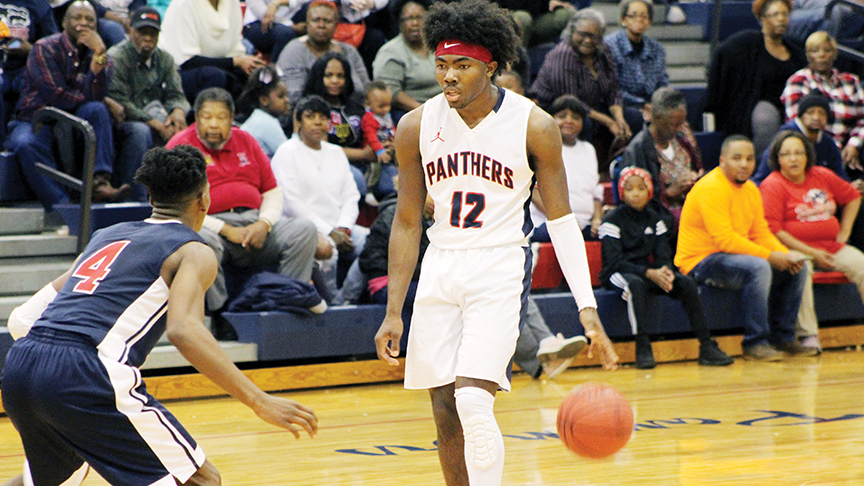 Photo by Cliff Furr Brookhaven High senior forward John Hilbert sizes up a Forest Hill defender in the second half on Tuesday night. Hilbert scored 11 points and grabbed four rebounds in a 72-61 Panther victory over the Patriots. BHS hosts Natchez on Friday.

Sinclair Gymnasium was more like a church on Tuesday night. Neither Greg Warnock of First Baptist nor Larry Jointer of St. James were preaching the message though they were both in attendance. It was the Brookhaven High Panthers who were delivering the sermon and exercising some demons from their recent past as they defeated Region 6-5A rival Forest Hill 72-61 in front of a raucous congregation.

The Panthers will play their final six games of the regular season at home though before going to the region tournament at Wingfield. The loss at Forest Hill had embarrassed the BHS players and head coach Marcus Flippin told his team that effort and passion were what he most wanted to see from them in the rematch.

“I told them winning and losing wasn’t what I was concerned with, I just wanted us to play hard,” said Flippin.

Both teams looked sluggish at the start of the game as Forest Hill also played on Monday, a 67-48 loss to Starkville High at St. Andrew’s. Midway through the first quarter both sides appeared to loosen up as the Panthers took a 14-11 lead after the first eight minutes of action.

BHS only has two players that average double-digit points per game for the season. Senior forward Lafollete Bogan averages a team best 21 points and sophomore point guard La’Darius Thrasher scores 12 points per game. The key for the Panthers on Tuesday was how unselfish the team was with the basketball. They moved it freely and made the Forest Hill defense work to guard them.

A tweak that has been made by Flippin has senior forward John Hilbert handling the ball away from the basket more to serve as a relief when the guards are facing pressure. Hilbert was an All-State wide receiver this season for the Panther football team and his physicality with the ball was a big part of the BHS success against FH.

Just before the halftime buzzer Hilbert drove into the lane and put up a floater that put BHS up 32-26 at the break.

“Coach told us at halftime to expect them to come out and make a run in the second half,” said Hilbert.

It was the BHS offense that came out hot in the second half as junior guard Jermario Hersey canned a corner 3-pointer in front of the BHS bench and then on the next trip converted a three-point play that had the home fans in a frenzy and his team leading by double digits.

Brookhaven would maintain their lead, even when Forest Hill made things hectic with their full-court pressure. FH cut the lead to 66-60 with 3:30 to play, but the BHS ballhandlers led by Thrasher and Axavian Jones settled their team down and took care of the rock to secure the win.

Forest Hill has a few prospects that are highly touted in 6-foot-4 senior Marc Evans and 6-foot-7 Keondre Montgomery. Evans scored 21 points to lead the Patriots. Montgomery scored 18 points but was held scoreless in the fourth quarter while also picking up a technical foul late in the game.

Thrasher was all over the court as he also accounted for seven rebounds and a block. BHS finished 22-of-30 from the free throw line with Thrasher going 8-of-10 himself.

“We hustled tonight and played defense and that was the difference from the last time we played them,” said Thrasher.

There’s no time for rest though as Natchez comes to Sinclair on Friday for another region matchup. BHS beat the Bulldogs 72-51 in Natchez on Jan. 4.

“Natchez is another big one here Friday,” said Flippin after the game. “Region games are must win at this point and we can’t afford to have a letdown.”