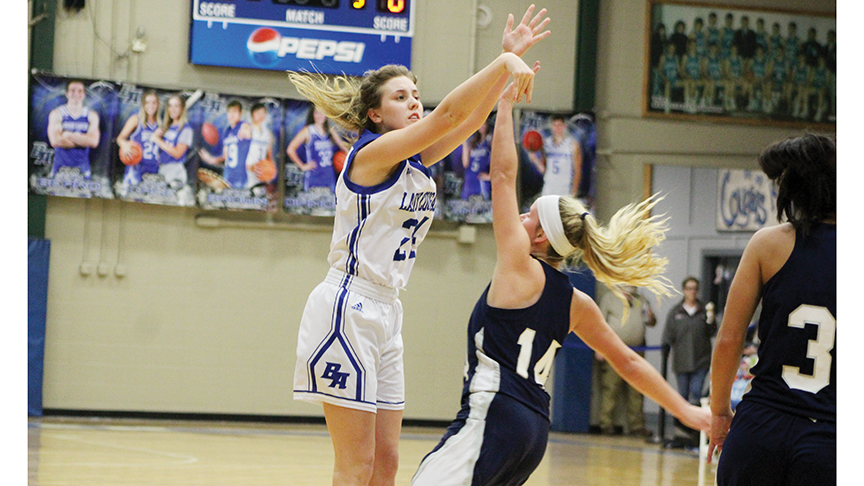 It felt like a playoff atmosphere from the tip on Thursday night as the Brookhaven Academy Lady Cougars (18-5, 5-0) hosted Clinton Christian Academy in John R. Gray Gymnasium. A game that got tight late came down to the final shot as a runner by Rae Rae York of CCA missed just before the buzzer and the Lady Cougars held on for a 49-48 win.

CCA defeated Brookhaven Academy in October for the MAIS AA State Title in softball and most of the Lady Warriors that suited up on the hardwood Thursday night were part of that team.

Sophomore Hanna Zeitz was the MAIS player of the year in softball, but she can also shoot the rock as her long-distance display in the fourth quarter helped cut into the BA lead.

The Lady Cougars were up 40-33 heading into the fourth, but three fourth-quarter 3-pointers from Zeitz would help CCA outscore the home team 15-9 in the final period. Zeitz finished with 12 points.

York and her sister — post player Iris Favre — were also an impressive pair of Lady Warriors. The duo transferred this to Clinton Christian this year after previously attending Choctaw Central High School.

Early on York was splitting the Cougar defenders with drives to the basket where she would find Favre or Grace Murry for layups. York finished with a team high 13 points while Favre and Murry scored nine and eight points respectively.

The Lady Cougars are a young team with only two seniors on the squad in leading scorer Jana Case and fellow starter Macie Grace Smith. In the first quarter it was some of the younger starters that got the BA offense going as sophomore guard Makayla Martin scored the first six points for her team to begin the game.

Freshman forward Emily Claire Felder also came out hot as she nailed three first quarter 3-pointers that helped stake BA to a 20-11 lead after the first quarter. The shorter Favre was hesitant to guard Felder so far away from the basket and Felder made her pay.

BA led 34-22 at halftime. Jana Case led the BA offense with 22 points. Late in the game as CCA crept closer, Case carried her team with seven of their nine fourth quarter points.

“It seemed like our legs went dead in the second half,” said Lady Cougar head coach Jason Case. “We had tried to get everyone rest on Tuesday night when we played Prentiss. Tonight, I wanted to get Jana some rest in the third quarter, but they began to guard us more full-court and she had to be out there.”

Both teams only used seven players apiece on Thursday. The win moves BA to the top of the standings in District 3-AA. BA and CCA will meet again on Thursday, when they play at A.E. Woods Coliseum on the campus of Mississippi College in Clinton. There will likely be a third meeting in the district tournament championship in the first week of February. Newton County Academy is hosting the district tournament.

“They hurt us on the boards tonight,” said Case. “Too much of what they did offensively came from rebounds under their basket.”

Another thing Case wants to see his team improve on is how they handle pressure in end-of-game situations.

A Zinke corner 3-pointer — off of an offensive rebound — pulled CCA within 49-48 as 24 seconds remained in the game. Clinton Christian was six fouls away from the bonus at that point and played for the steal with aggressive trapping defense.

With 4.3 seconds left BA was inbounding the ball in front of their bench at half court coming out of a timeout. On the inbounds the Lady Cougars committed an over-and-back violation that set up York attempting her game winning shot.

“We can learn from that situation at the end of the game,” said Case. “Give Clinton credit for making us earn it, I was proud of the way our girls responded to everything they threw at us.”

BA hosts Cathedral on Tuesday before traveling to play CCA on Thursday. The Lady Cougars close out their regular season schedule on Friday when they host Copiah Academy for Senior Night.