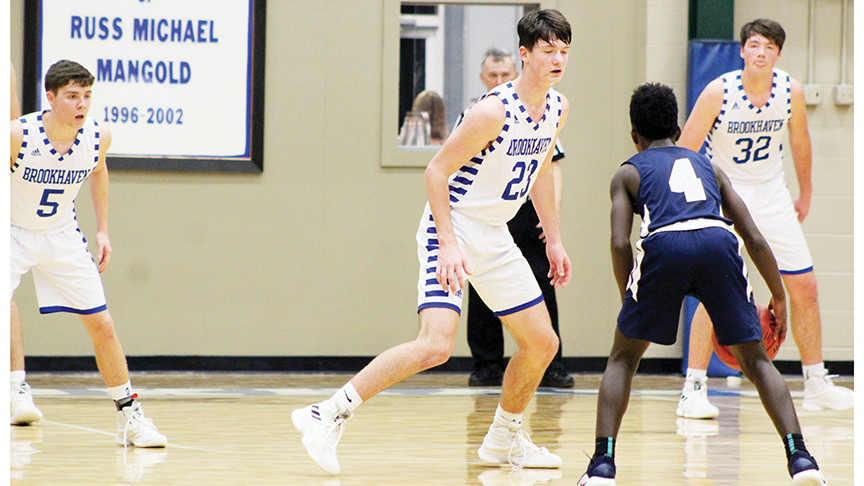 Coach Josh Watts tinkered with the lineup on Thursday night until he found the right combination for his Brookhaven Academy Cougars against Clinton Christian Academy. BA trailed 16-13 after the first quarter, but the Cougars (20-3, 5-0) and their coach were able to push the right buttons on the way to a 57-42 win over the Warriors in John R. Gray Gymnasium.

“We definitely had some groups out there in the second half that were a completely different than the combinations we usually use,” said Watts.

Facing a smaller CCA team that is driven by a speedy point guard in eighth grader K. J. Sykes, BA was presented with some odd matchups to stop. Sykes is maybe 5-feet tall but does a great job of controlling the flow of action for his team with his handles.

Sykes scored nine of the 16 CCA points in the first quarter and finished with a team high 15 points to lead his team.

It was one of the youngest Cougars who answered the bell in the second quarter to push BA into the lead. Freshman Tyler Fortenberry scored seven second quarter points as BA outscored CCA 17-9 in the period. Fortenberry finished with 14 points.

Watts found success with Fortenberry (6-foot-4) playing alongside his brother Trey (6-foot-3) and a trio of seniors in Dawson Flowers(6-foot-4), Cade Brown (6-foot-3), and Tanner Thurman (6-foot). That lineup ate up space and cut down on driving lanes that the Warriors had early on.

The Cougars don’t shoot a high volume of 3-pointers with Watts preferring for the ball to go inside first to the skilled forward duo of Flowers and Brown. In the third quarter Thurman hit two 3-pointers that gave his team a boost as they began to pull away.

“I’m OK with them shooting it when they’re open,” said Watts. “We probably need to shoot it from deep a little more actually. Thurman, Sean Beard, and Tyler have all shot the ball well for us all year and Tanner hit some clutch shots tonight.”

Where the Cougars were tall, the Warriors were quick. CCA was active in the passing lanes early and Watts knew his team would need to score in transition.

“We started to speed them up because we weren’t getting anything in our half court sets,” said Watts. “They do a really good job of closing out and staying in front on defense.”

The Cougars and Warriors play again on Thursday. BA also hosts Cathedral on Tuesday. Copiah Academy visits BA for senior night on Friday. The Colonels beat the Cougars when the teams previously met on Nov. 27.