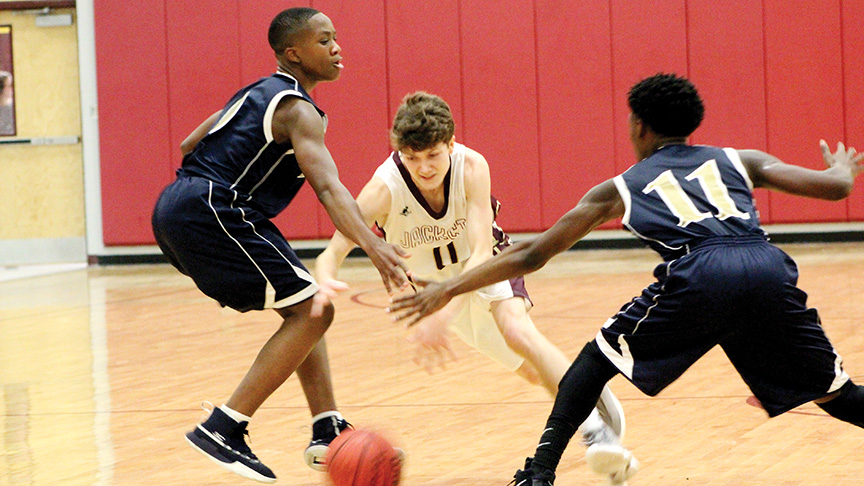 Photo by Cliff Furr Enterprise point guard Hib Johnson tries to split the trap of Markee McGee and Lincoln Collins of Bogue Chitto on Tuesday night. Johnson would hit two free throws to send the game to overtime before the Bobcats held on for a 72-68 win.

Trailing by 10 points with 90 seconds left, the Enterprise Yellow Jackets (4-18, 0-8) used a frantic comeback to tie their game against Bogue Chitto and force overtime on Tuesday night. The overtime period would be all Bobcats (6-18, 2-4) though, as BC held on for a 72-68 win.

Bogue Chitto led 13-10 at the end of the first quarter and 27-22 at halftime as Tristan Buffington knocked down a free-throw line jumper just before the second quarter horn for the Bobcats.

The Bobcats have used a variety of different starting lineups as the season has progressed. On Tuesday they started freshman Markee McGee at the point along with Brandon Lewis and Damarcus Godbolt on the wings. Junior Zach Upkins and senior Warrick Cook started at the forwards. Junior Josh Thomas — the team’s leading scorer — was on the bench in street clothes.

For first year coach Marvin McGee, the key is to meld his players as Lewis, Jermaine Black, Darius Porter and Malik Richarson just became eligible to play after missing a majority of the season.

Richarson is a strong inside post presence, something the team lacked in his absence, but on Tuesday he battled foul trouble. He finished with eight points but fouled out in the fourth quarter after being called for an over-the-back foul and then a technical for disputing the foul.

Upkins scored a team high 15 to lead the Bobcat offense followed by Porter with 14 points.  Bogue Chitto also got 14 points from junior guard Lincoln Collins who shot the ball well from deep as he finished with three 3-pointers.

Bogue Chitto led 42-34 after three quarters and were up 53-43 after Collins drove to the basket and dumped the ball off for a Porter layup. Porter was fouled and made the free throw and with just 1:30 left in the game it looked like the Bobcats would cruise to the win.

The Yellow Jackets and their fans began to pick up the pace and the noise on the next possession when Anthony Nations drained a corner 3-pointer.

Coach Shane Adams then had his team pick up in a man-to-man defense for the full-court. Hib Johnson made a steal for Enterprise but missed the layup. A put-back attempt saw senior Jalon Grinstead fouled. Grinstead calmly knocked down both free throws and the lead had shrunk to 53-48 with 49.3 seconds left.

Following a timeout, the Bobcats would again turn the ball over as they attempt to inbound. Johnson would miss a 3-pointer, but another long Bogue Chitto pass resulted in a turnover. It was Nations again from the same corner who hit a 3-pointer to pull his team within 53-51 with 28.2 seconds remaining as the Jacket crowd was on their feet in celebration.

And once again — as Bogue Chitto attempted to get the ball in — they turned it over against the Enterprise press. Johnson was fouled, sank both shots, and tied the game at 53-53.

The problem was Enterprise forgot to dial the pressure back after tying the game. Nations fouled Markee McGee 45-feet away from the basket and sent the freshman to the line where he put his team back up 55-53.

Johnson would bring the ball into the frontcourt for Enterprise and got fouled on a Bobcat trap. The sophomore Yellow Jacket point guard calmly knocked down both free shots to tie the game at 55-55.

On their final possession in regulation Upkins drove the lane and passed off to Porter under the basket, but the shot attempt just before the buzzer was no good.

As exciting as the final minutes of regulation were, overtime wasn’t quite as dramatic.

Bogue Chitto went up early and no matter what Enterprise did to recreate their comeback in regulation, the Bobcats hit free throws late to ice the win. The Bobcats only made two field goals in OT as Upkins, Collins, and McGee all made free throws in the period to seal the win.

“We’ve got to trust each other,” said coach McGee. “At the end of the fourth quarter we weren’t doing that, but we did a better job in overtime. If we can learn to trust each other and come together this late in the season, we’ve got a chance to win some games.”

It was the third meeting of the season between the two teams as Bogue Chitto won 53-43 at the county tournament and 56-45 on Jan 18. There will be a fourth meeting as the two will almost certainly finish as the fourth and fifth seeds in the Region 7-2A standings and then play each other in the opening round game of the region tournament next week at Amite County.

“Proud of the way the guys fought until the end tonight,” said Adams. “We just kind of ran out of steam there at the end. I preach effort and attitude and my guys gave me all they had.”