What do you do if your pet goes missing? 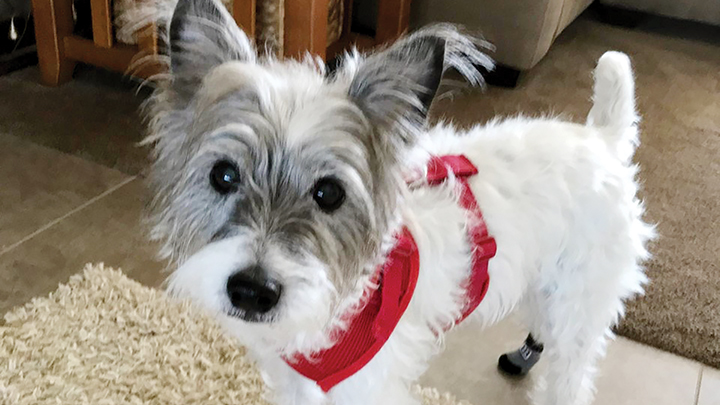 Photo submitted Lil Pup will soon be reunited with his family in Brookhaven.

A: Check shelters, put up flyers, canvas neighborhoods and don’t give up.

A Lincoln County woman never gave up hope that she’d be reunited with a missing member of her family — her nearly 12-year-old wire haired Jack Russell terrier, Lil Pup.

According to the Brookhaven Animal Rescue League, the white and gray terrier was displaced from its family and brought to BARL.

“After actions taken by people other than the family and BARL, this pet was taken in at BARL,” said board member Rusty Adcock. “Unfortunately, the pet was placed on transport after the normal five-day hold before any notice of the pet being lost made its way to BARL.”

After several weeks, Lil Pup — who was transported to the Northeast — will soon be making the trip back to Mississippi.

“BARL volunteers worked with the multiple transporting coordinators to compile and present all available information to the receiving shelters’ board of directors to enlist their help contacting the adoptive family,” Adcock said. “We were very happy to hear the family was willing to return him.”

And while this particular story will have a happy ending, not all searches end in smiles.

Adcock said there are things that pet owners can do to help keep their animals safe, and preventative measures that can be taken to make it easy to be reunited if a fur baby is ever lost or stolen.

Rabies tags should always be on its collar so people can quickly see that your pet has been vaccinated for the disease. Rabies tag numbers also allow tracing of animals and identification of a lost animal’s owner, but it can be hard to have a rabies number traced after veterinary clinics or county offices are closed for the day, Adcock said.

Micro-chipping is another level of security for pets. The microchip databases are online or telephone-accessed database and are available 24 hours a day, seven days a week, 365 days a year.

Microchips are great for permanent identification that is tamper-proof, but nothing replaces a collar with up-to-date identification tags, he said. If a pet is wearing a collar with tags when it’s lost, it’s often a very quick process to read the tag and contact the owner; however, the information on the tags needs to be accurate and up-to-date.

“However, if a pet is not wearing a collar and tags, or if the collar is lost or removed, then the presence of a microchip might be the only way the pet’s owner can be found,” he said.

• Make a flier with the pet’s picture and a phone number.

• Visually search the neighborhood for the pet, posting and handing out copies of the flier wherever possible. Post your fliers in the area where your dog was last seen, in grocery stores, community centers, vet offices — anywhere the flier has a chance to be noticed by lots of people in your neighborhood or community.

• Check with BARL, the city’s animal shelter and Rescue Tails. File a lost pet report with every shelter and animal control office within a 60-mile radius of your home and visit the nearest shelters daily, or as often as possible.

• Get the word out to all the veterinary clinics in your area. Many people who find lost pets take them to their own vet’s office or another clinic close to where the animal was found.

• Walk and drive through your neighborhood and the area where your pet was last seen as often as you can, and recruit friends and family to do the same.

• Do online searches for animals fitting your pet’s description. It’s possible someone has your dog or cat and is trying to sell him.

• Don’t give up your search too quickly and be aggressive. Dogs and cats gone for months have been returned to their owners.

Unfortunately, some pets aren’t lost, they’re stolen. Dogs are the most common targets and they’re stolen to be given as gifts, to become the thief’s personal pet or to be sold for quick cash, often over the internet.

Puppies, toy breeds and purebreds that look expensive or unusual are most often taken, he said.

Here are a few steps to keep your dog safe from thieves:

• If your dog is ever in the backyard alone, make sure your fence is secure and your gate is not only closed, but also locked.

• Never allow your pet to roam free around the neighborhood.

• Don’t leave your dog in an unlocked parked car, or one with the windows down far enough that the dog can be removed through a window.

• Make sure your pet is wearing a collar with a current ID tag at all times. Rather than imprinting the dog’s name on the tag, put ‘Reward for Return’ instead, along with at least one current phone number. It’s better if a thief can’t call your dog by name.

• Keep recent photos of your pet on hand. They should show her at different angles, her coat color, her face in close-up and any unusual physical characteristics she has. Store photos with your proof of ownership paperwork like adoption papers, bill of sale, etc.

Even following all the suggestions, pets can sometimes end up at BARL, which is a no-kill shelter, or at the city pound, which can euthanize animals when necessary.

BARL receives hundreds of animals at its adoption center every year, Adcock said. In 2018, they took in over 1,300 cats and dogs. Through adoption and transport, they homed around 1,250 of these animals.

“When an animal is brought into our organization, we have a duty and obligation to care for and do what’s best for that animal with the information we have on hand,” Adcock said. “According to Mississippi state law, city and county animal control must hold an animal for a five-day period to give any potential owners a chance to come and look for their lost animal. BARL has adopted a hold regimen for the animals we intake. After that hold period and pending a medical exam, that animal becomes available for adoption or transport.”

With just three part-time workers who do daily cleaning, feeding and adoptions and a team of volunteers, BARL’s priority is to find homes for its animals as quickly as possible, he said.

“We do not have the manpower, facilities or resources to hold onto animals indefinitely, so, after the holding period, if the animal has not been reclaimed, our first priority is finding that animal a loving home,” Adcock said. “Getting these cats and dogs out of BARL and into loving homes is always the goal, whether that is achieved through owners reclaiming their lost pets, local adoption or through transport. And all of our animals that find homes through local adoption or transport are vetted, and have a mandatory spay/neuter requirement.”

BARL also microchips cats and dogs during the vetting process, he said.

All of that comes with a hefty price tag.

“Adoption fees do not come close to covering the amount of resources we put into each individual animal to get them ready for transport or adoption,” Adcock said. “In addition, our organization also does not make a profit on any animals we send on transport. BARL is completely dependent on donor support, fundraisers, and some grant funding to help cover operating expenses and veterinary care.”

Transport — such in Lil Pup’s situation — is common in Southern states where there are more animals needing homes and not enough people willing to adopt.

“Transport often gives hope to animals that have sat at BARL for weeks, sometimes months,” he said. “In certain Northern states, they are adopted within a week and sometimes in a day or two.”