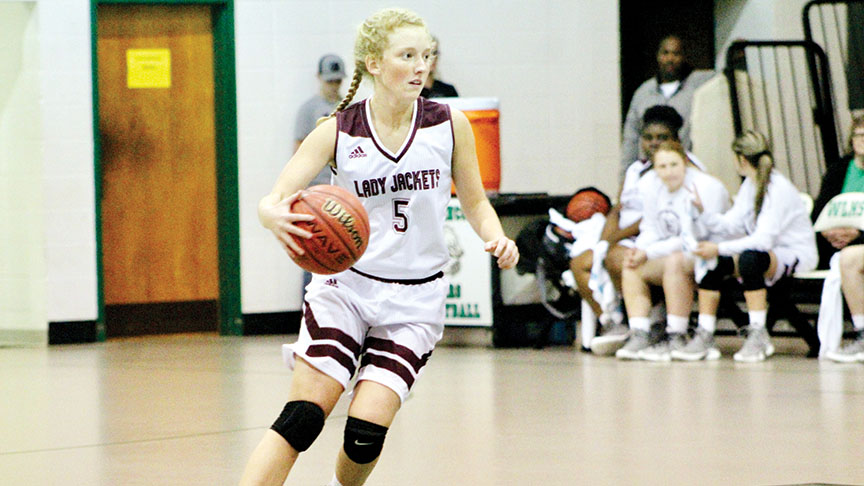 It was the Enterprise Lady Yellow Jackets (7-16) who made the plays down the stretch on Tuesday night in their opening round Region 7-2A tournament game against Amite County. The Lady Jackets used a fourth quarter surge to take a 36-30 win over the Lady Trojans.

The two teams had split their previous matchups during the regular with each side winning a close game on their home floor. The region tournament was originally scheduled to be hosted by Amite County, but concerns with their playing surface forced the event to be moved to West Lincoln on short notice last week.

On Tuesday Enterprise coach Shane Adams used a strategy that had Amite County off balance in the early going.

“Both times we played them during the regular season we played strictly man-to-man defense,” said Adams. “Tonight, we came out and mixed up some half and three-quarter court zone traps and that slowed them down early.”

Enterprise led 13-10 at halftime. The beginning of the final period saw the game tied 20-20.

A driving basket by Breyauna Johnson put the Lady Jackets up at the start of the period. On the next Enterprise possession Adams saw his team go up 24-20 on a high arching shot by Belle Porter. Good ball movement a few possessions later led to a Britany Barnett 3-pointer that had EAC up 27-20 and their crowd fired up.

Enterprise would go cold late in the quarter and the game began to devolve as the officials struggled to control the action. Amite County seized on the lax officiating and pulled within 32-30 with a minute left.

It would be an eighth grader — point guard Hannah Jergins — who came up clutch for Enterprise in the final sixty seconds. Jergins scored the final four points of the game — two on free throws and one on a layup — to give her team their final margin of victory.

“We’re our best sometimes when the game gets a little chaotic and tonight we made plays when we had to have them,” said Adams. “Bre was aggressive and Hannah played way above her age. I couldn’t be prouder of these girls.”

Enterprise now moves on to face No. 1 seed West Lincoln (20-5) in the semifinals today at 4 p.m. The Lady Jackets also extended their season by guaranteeing they’ll play in the opening round of the MHSAA 2A state tournament next week with the win over Amite County. It’s the first trip to the postseason for the program since the 2012-2013 season.

West Lincoln is 3-0 against Enterprise this season and won those games by an average of 53 points.

Bogue Chitto and Loyd Star set for round four in semifinal

The No. 2 seeded Bogue Chitto Lady Bobcats (18-8) take on the No. 3 seeded Loyd Star Lady Hornets (12-11) in a matchup scheduled for 7 p.m. tonight. It will be the fourth matchup of the season for the two teams.

Bogue Chitto had a chance to win the region but dropped their regular season finale 39-32 in a tight loss to West Lincoln that gave the Lady Bears the top seed. Loyd Star has won five games in a row with their last defeat coming to Bogue Chitto.

Loyd Star gets the majority of their offense through senior post player Sarah Britt. Britt injured her ankle against West Lincoln last week and was in a walking boot on Tuesday as she watched the opening round games of the tournament. Freshman point guard Aubrey Britt is also one of the leading scorers for coach Christi Terrell and her Loyd Star team.

Bogue Chitto relies on outside shooting for their points production. Karly Leake, Tyuna Brumfield, and DeAnna Edwards are the leading shot makers for a patient and deliberate attack that head coach Robby Walters has created in his first year of leading the Lady Bobcats. Walters replaced Terrell when she took the Loyd Star job after 14 years coaching her alma mater.

The consolation game and final are scheduled for 4 p.m. and 7 p.m. Friday. The two teams that win tonight will host a home playoff game next week while the two losers will go on the road in the opening round.