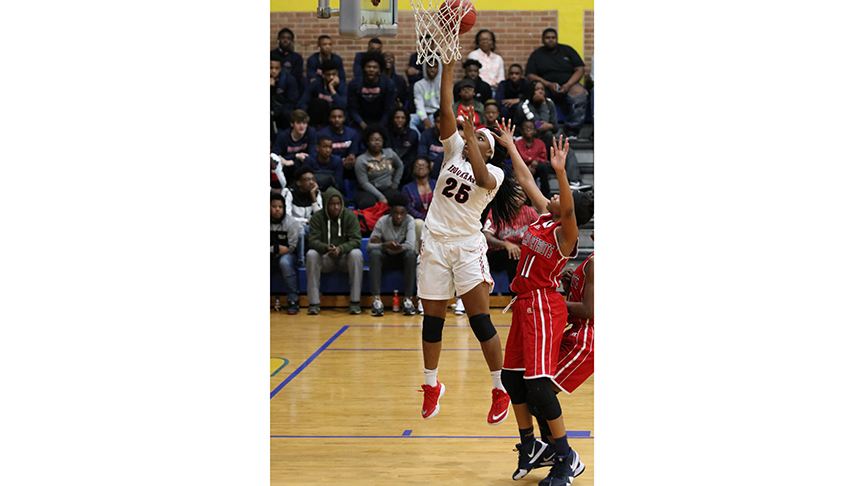 Brookhaven High senior forward Tamia Stallings makes a move towards the basket on Friday against the Forest Hill Lady Patriots. Stallings and the Lady Panthers next play on Friday in a 5A State Tournament second round game.

The Brookhaven High Lady Panthers won their second straight Region 6-5A tournament on Friday night with a 42-32 win over the Forest Hill Lady Patriots. In the boys’ championship Forest Hill jumped out to an early lead before cruising to a 78-47 win over the Panthers.

With the win the Lady Panthers (26-1) receive an opening round bye in the 5A state tournament that begins on Monday. BHS will next play on Friday at home against the winner of the West Harrison and North Pike game.

The win over Forest Hill was the third of the season for the Lady Panthers and as has been the case in their other matchups, the Lady Patriots were able to keep the game close. BHS led 6-4 after the end of the first quarter and 14-11 at halftime.

BHS coach Preston Wilson says the Lady Patriots came out with a strategy to slow down his team’s offense.

“We got off to a slow start due to Forest Hill playing a box-in-one on Silentianna Collins,” said Wilson. “We made adjustments at half and were able to pick it up offensively in the second half.”

Collins averages a team high 14.5 points per game and most of the early Brookhaven offense runs through her as a point-forward. With FH denying the ball to Collins, Wilson saw other members of his team step up, especially when senior forward Tamia Stallings and her 13.7 points per game and 9.9 rebounds per game went to the bench with foul trouble.

“Dymonde Washington gave us great minutes off the bench when Stallings was in foul trouble,” said Wilson.

Washington — a senior — scored seven points on 3-of-3 shooting from the floor while grabbing two rebounds and making as steal.

What kept the game tight for BHS was what always works for the Lady Panthers, their defense.

“Defensively we played very well and were aggressive throughout the game,” said Wilson.

Panthers back in action on Tuesday at home

Brookhaven and West Jones will play in the same region beginning next season.

The winner of the BHS versus WJ game will travel on Saturday to play at Long Beach (23-6).