Lamar Christian Lady Lions too much for BA in title tilt 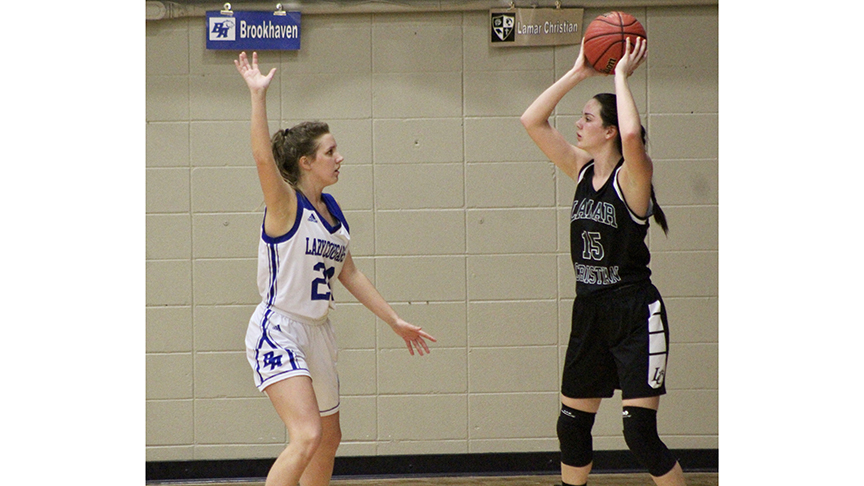 Photo by Cliff Furr Jana Case of Brookhaven Academy pressures Rebekah Engle of Lamar Christian on Saturday in the AA South State Championship. Engle scored 22 points to lead the Lady Lions to a 44-27 win over BA. Case and the Lady Cougars play Tuesday at Benton Academy in a 6:15 p.m. first round game against Tri-County Academy.

The good news for Cougar fans is Lamar beat BA last year in the same tournament before the Lady Cougars exacted revenge a week later by beating the Lady Lions in the state tournament semifinals. Coach Jason Case and his team would then go on to win the state championship on their home court with a victory over Marshall Academy.

Playing in John R. Gray Gymnasium on Saturday afternoon in front of a large partisan crowd, the Lady Cougars (25-7) struggled shooting the ball throughout their matchup with LCS. In their third game in as many days, it looked like the ladies in blue and white lacked lift on their jump shots.

“We just never got into any flow on offense,” said Case. “We struggled to shoot it and to score.”

Coach George Coll and his Lady Lions (29-3) played for the state championship two seasons ago before losing to Marshall in the finals. This season the Lady Lions have wins over MHSAA members North Forrest, Lumberton, St. Patrick, Sumrall, Purvis, and Green County. The only losses for LCS were to Simpson Academy, Columbia Academy, and an overtime defeat to Purvis.

Lamar Christian is located in Purvis and was established in 1998.
Senior forward Rebekah Engle is the most impressive piece of an LCS lineup that features four senior starters. The 6-foot Engle can shoot over smaller defenders from range, but also has moves to play with her back to the basket down low. Engle scored 22 points to lead her team and 14 of those came in a first quarter that saw her knock down three 3-pointers.

Lamar led 20-9 after the first quarter. Late in the period Coll put his team in a three-quarter court zone that caused BA turnovers that led to the growing Lady Lion lead.

BA came out in the second quarter and began to claw back into the game. Freshman Madison Moak nailed a 3-pointer for the Lady Cougars and then fellow frosh Emily Claire Felder canned a corner 3-pointer that gently kissed the glass on the way down. Jana Case would come down off the bounce to knock down a 3-pointer that cut the LCS lead to 24-18 with 3:30 remaining until halftime.
With BA in a zone, Coll elected to have his team hold the ball for the final three minutes of the half. In the semifinals a night earlier, Lamar had beaten Clinton Christian 41-37 in a tight game. LCS didn’t get anything offensively after holding the ball for over 180 seconds and led 24-18 at the break.

Martin, Case, and Anne Brantley Warren were named to the all-tournament team.

BA next plays Tri-County Academy in the opening round of the state tournament Tuesday at 6:30 p.m.