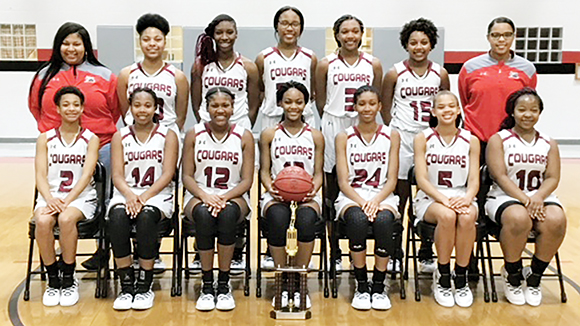 Photo submitted The Lawrence County Lady Cougars moved on to the second round of the MHSAA 4A State Tournament with a 52-25 win over the Bay High Lady Tigers on Monday night in Monticello. Coach Vicki Rutland and her team host McComb on Friday night in the second round.

Lawrence Co. Lady Cougars blast Bay High in round one

The defending MHSAA 4A state champion Lawrence County Lady Cougars (21-7) had no problem with the Bay High Lady Tigers on Monday night in Monticello as they whipped the visitors from the coast 52-25.

The Lady Cougars have now won 14 of their last 15 games. Of their seven losses this season, two of those came at the hands of the nearly undefeated Brookhaven High Lady Panthers (26-1). All of the other five losses came by five points or less and only one of them — a 50-49 loss to Greene County — came after the Christmas break.

Lawrence County got revenge for that defeat last week with a 42-32 victory over Greene County in the Region 7-4A finals. The Greene County loss was the only defeat suffered by LC since they joined the region last year.

On Friday Lawrence County hosts McComb High in a second-round game in Monticello. The Lady Cougars defeated McComb 39-35 on Nov. 19 in the LC Holiday Tournament.

Last season McComb and Lawrence County met in the playoffs — a semifinal game that the Lady Cougars won 53-38 in the Mississippi Coliseum.

Tipoff between Lawrence County and McComb is set for 7 p.m. in Monticello on Friday.

The Loyd Star Hornets won the Region 7-2A Tournament on Friday night with a 71-57 victory over West Lincoln. Loyd... read more