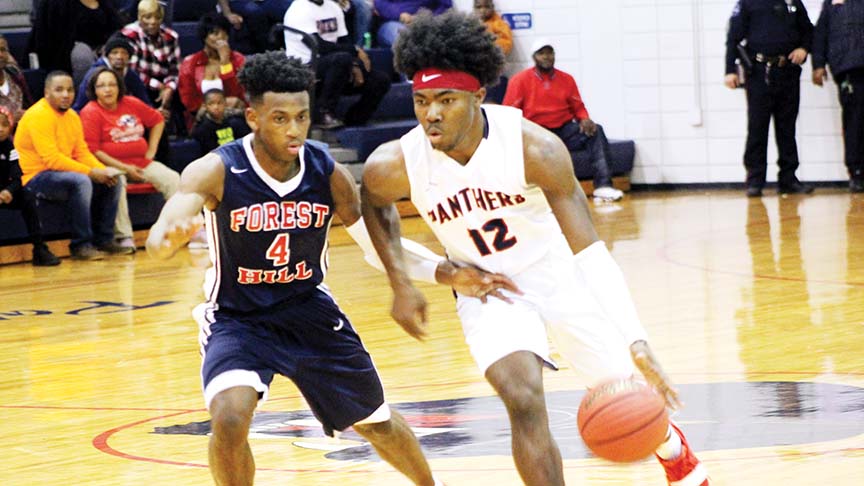 Photo by Cliff Furr Brookhaven High senior forward John Hilbert put the Panthers up 67-66 with three minutes remaining Thursday night. However, Long Beach would retake the lead and build on it for a 79-70 victory over BHS in the second round of the MHSAA 5A State Playoffs.

In a back-and-forth MHSAA 5A second round matchup, the Long Beach Bearcats made 11 free throws in the fourth quarter to build a late lead and eliminate the Brookhaven High Panthers 79-70 on Thursday night.

Ramirez Cooley of Long Beach (24-6) dunked the ball at the buzzer to provide the final points of the game for the home team. The last LB field goal before that basket came with 5:34 left in the game when Khaleb Marks converted a layup.

Long Beach led 57-52 after three quarters and then were up 66-56 after the Marks layup. Brookhaven High (21-8) would start to chip away with John Hilbert grabbing an offensive rebound on a missed free throw and laying it back up to cut the lead to eight. A trap at half court would then force a Bearcat turnover as Isaiah Wall scored on a layup off the steal to pull BHS within two possessions.

The Panthers would keep their run going with a Lafollete Bogan basket on another offensive rebound. A three-point play by sophomore point guard La’Darius “Duke” Thrasher cut the lead to 66-65 and then the Panthers would take the lead on a Hilbert put-back that made the game 67-66 in favor of the visitors.

Brookhaven led 30-24 in the second quarter before seeing the Bearcats come back to tie the game at 33-33 at halftime.

In a timeout after the Panthers grabbed the lead their coach Marcus Flippin implored his team to keep the pressure up as he told them to “look at what you just did.” 2:58 remained in the fourth quarter.

A layup by Thrasher would be the only field goal scored by the Panthers in the final three minutes of the game.

The Bearcats finished 22-of-28 from the free throw line. Handy — a freshman — went 10-for-10 from the charity stripe and scored a game high 34 points.

Thrasher scored 18 points for the Panthers and was followed by Bogan who added 15 points. Hilbert scored 14 for BHS.

“Tough loss. No reason to hold our heads down,” said Flippin “We played hard and our seniors had a great year. Now for everyone else it’s time to get ready for next season. We have to get a little bigger, a little faster and a little stronger this offseason. What we do during the offseason will determine where we end up this time next year.”

The Panthers lose a solid core of seniors in Wall, Hilbert, Bogan and Axavian Jones. Hilbert has signed to play football with East Central CC, Jones has signed with Co-Lin football and Bogan is a verbal basketball commit to Southwest Mississippi CC Bogan ended the season averaging a team-high 22 points per game.

The cupboard is far from bare for BHS though as they look to continue to build after reaching the playoffs in Flippin’s second year as head coach. The Panthers won nine more games this season than last. Thrasher, Jermario Hersey and Kadarius Wells form the core of returnees for next season..