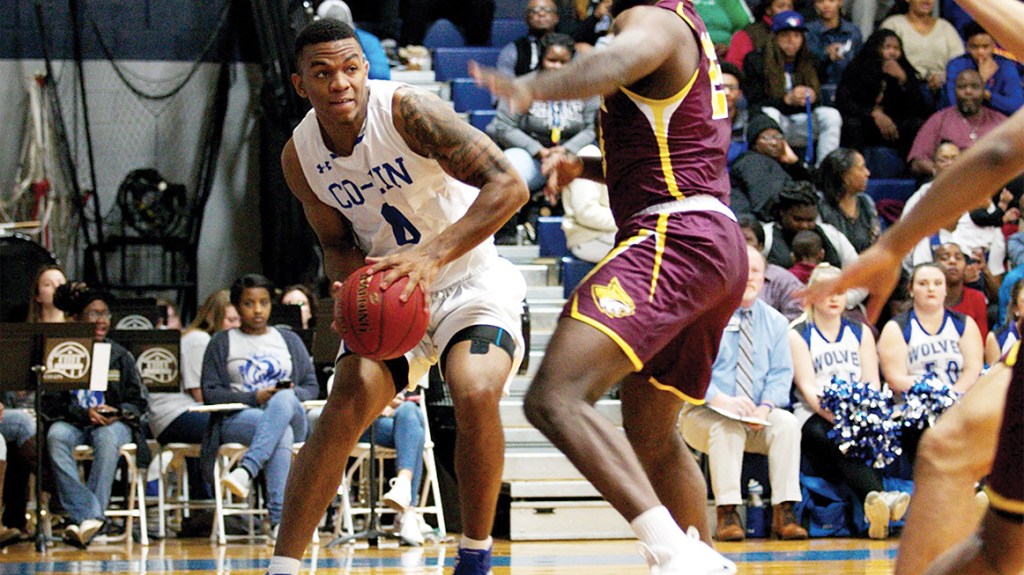 Photo by Co-Lin Sports Information Freshman forward Cameron Woodall will be among the leading returnees for Copiah-Lincoln basketball next season after averaging 12.9 points and 6.9 rebounds per game as a freshman.

The Copiah-Lincoln Community College Wolves finished out the 2018-2019 season with a 91-50 loss to Jones College on Thursday night.

“We played a really good basketball team tonight,” said coach Kenny Bizot. “We played the best we could tonight, so I’m proud of our guys.”

Jones took an early and commanding lead in the contest as their lead grew to 12, 15-3, in the first five minutes of play. Co-Lin battled throughout the first half and cut the lead back down to 12, 25-13, midway through with a 5-0 run from Damarius Brooks, but the Bobcats started pouring in the baskets once again. At the break, Jones led by 27, 51-24.

The second half was much of the same. The Bobcats continued to knock down big shots, but the Wolves continued to fight hard, not allowing any basket to come easily. Late in the game, Co-Lin fired off a 6-2 run led by Cameron Woodall, but Jones won decisively 91-58.

Miles Daniels led Co-Lin with 16 points, while Brooks poured in 13. Woodall finished with nine points and a team-high seven rebounds. Lazorian McNulty came off the bench to dish four assists.

Kenneth Rogers led Jones with 18 points after hitting a blistering 6-of-14 from three-point range. Winceton Edwards finished with 14, while Tirus Smith posted 13. Smith and David Gaines Jr. led the Bobcats with seven boards.