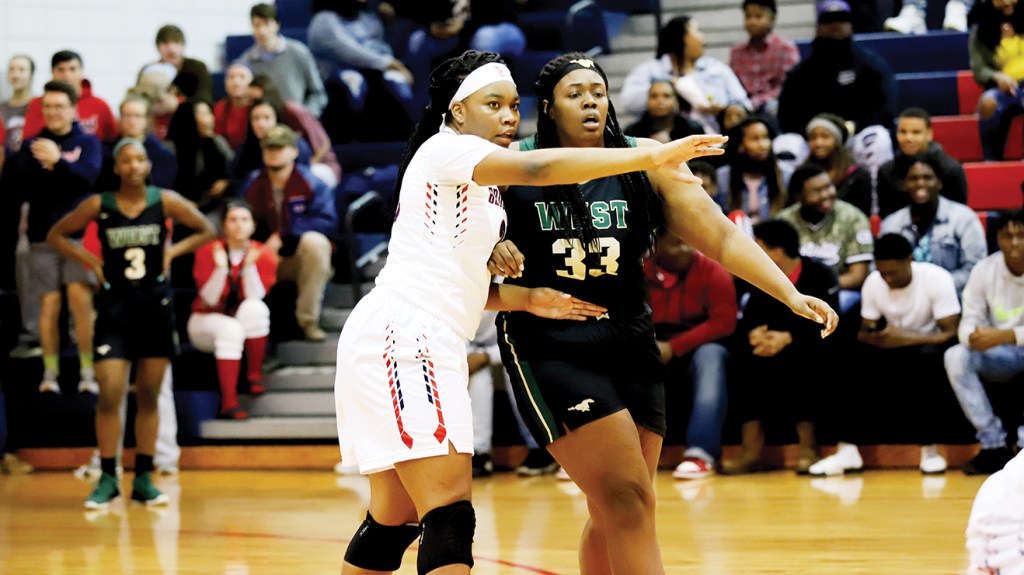 The West Jones Lady Mustangs (28-0) took the best shot the Brookhaven High Lady Panthers (27-2) could give them on Monday in their highly anticipated MHSAA 5A quarterfinal matchup in Sinclair Gymnasium.

A big third quarter put the Lady Mustangs in the lead and Brookhaven would see their comeback attempts fall short in a 78-68 WJ win.

Playing in front of a packed gym, BHS came out on fire to start the game … 3-pointers by Ayanna McNairy, Ashanti Louis, and Silentiana Collins were part of a Lady Panther run that had their team up 13-2 early.

West Jones is a good team though and good teams don’t get shaken when things don’t go their way early. The Lady Mustangs kept driving to the basket and shooting layups as they cut the deficit to 17-13 at the end of the first quarter.

The game changed when BHS senior starter Cynphoni Thompson went to the bench with two fouls in the first quarter. The Lady Panthers rely heavily on their starting five with Louis at the point, McNairy shooting on the wing, Collins scoring the ball from inside and outside, and Tamia Stallings being a force in the paint. The role Thompson plays is that of a Swiss Army knife, a tool used by coach Preston Wilson in a variety of ways.

The Lady Panthers were using a matchup zone to try and slow down the dribble dependent WJ offense. Thompson was essential to that game plan and is one of the strongest, most opportunistic rebounders on the team. Her going to the bench changed things early for Wilson and his staff.

“We had a good game plan and it was working early for us,” said Wilson. “When we were forced to go to the bench we had some lapses that hurt us with miscommunication.”

The Lady Mustangs took their first lead at 21-19 on a Brikayla Gray 3-pointer early in the second quarter. A 5-foot-8 junior, Gray is one of the leading offensive threats for the WJ offense. The other go-to scorer for the Lady Stang offense is senior guard Jurnee McLaurin. McLaurin dribbles with both hands masterfully and gets north-south in a hurry. The pair combined to score all but two of their team’s 13 first-quarter points.

WJ also has a strong inside presence in 6-foot senior Mia Moore. Her two free throws late in the second quarter tied the game at 33-33 and that’s what the score would remain at the break. Gray, McLaurin, and Moore combined to score all but two of the West Jones points in the first half.

In the third quarter West Jones outscored BHS 23-14. The formula for success that coach Sharon Murray uses isn’t a complex one, but her team is disciplined in their approach. If the offense misses a shot and doesn’t hurry back on defense, West Jones makes you pay by flying down the court for transition baskets.

In the third McLaurin scored 10 points and Gray added eight as the Lady Mustangs quieted the BHS home crowd.

The final eight minutes could not have started better for the Lady Panthers. Thompson got things going with a jumper and then the home team moved into their full-court pressure. The Lady Panthers then went inside to Stallings who scored on a layup inside and got fouled.

Stallings sank the free throw and then made another layup after the Panther press forced a turnover. Stallings was fouled again and missed her second free-throw, but a WJ scramble for the rebound knocked the ball right into the waiting hands of Louis who put it back up for a score.

The deficit was now 56-51 with 6:38 remaining, the Ole Brook crowd was fired up, and Murray was calling for a timeout.

Collins would score four straight points coming out of the timeout as BHS pulled within 56-55. West Jones would respond with a three-point play by Gray that put the lead back at four.

Collins was masterful in the final five minutes as she hits jumpers, floaters, and layups despite the WL defense keying in to stop her. Every score by the Lady Panthers was met with a return scored by the Lady Mustangs though, as McLaurin matched Collins nearly shot for shot late.

BHS trailed 69-66 and later 71-68 after buckets by Collins, but West Jones got a jumper by Moore and a pair of free throws by McLaurin to keep the lead at two possessions both times.

The Lady Mustangs made late free throws to extend their advantage to the final margin.

Stallings, Thompson, Nefritiria Carter, Yacouriuna Braxton, Keyana Benjamin, and Dymonde Washington are part of a senior class that has played for Wilson all four years they’ve been at 443 East Monticello Street.

The first season that Wilson moved from the boys’ bench to lead the girls’ program — their freshman season —the varsity team finished 3-24. The team had been 4-21 the previous season. Stallings, Thompson, and Miller all saw varsity experience that season out of necessity.

The Lady Panthers then improved to 14-14 the next season, won the regular season division title, and made the second round of the playoffs before being eliminated by West Jones.

Last year their record improved to 24-7 and ended with a close quarterfinal loss to Lafayette County. The program has been rebuilt by the work of the departing seniors.

“They’ve given everything to get us to this point,” said Wilson. “They’re outstanding girls and I told them they’ve left a legacy for our future teams to live up to.”