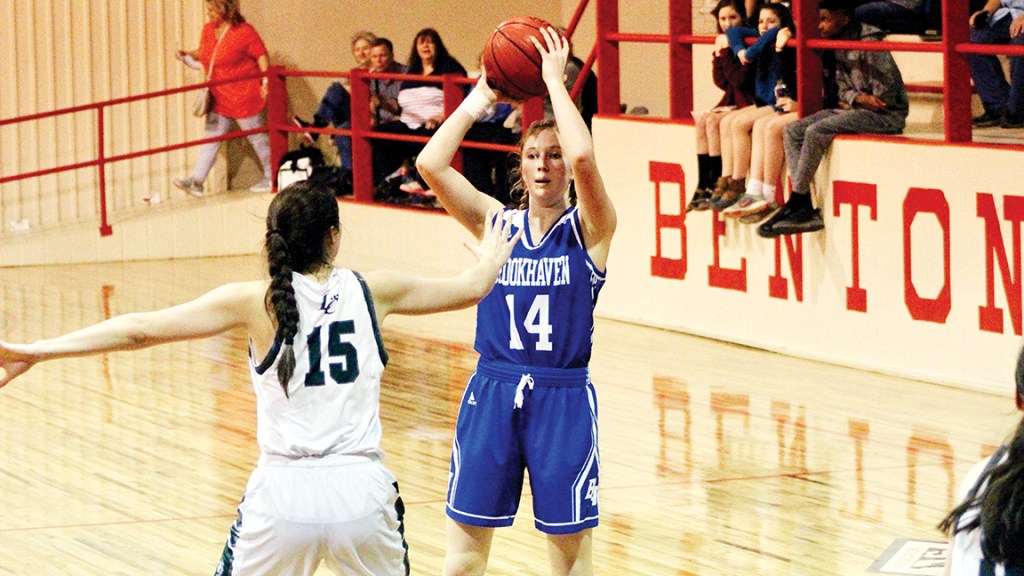 Photo by Cliff Furr Brookhaven Academy freshman forward Emily Claire Felder scored 16 points and grabbed eight rebounds for the Lady Cougars in their 64-61 loss to Simpson Academy in the quarterfinals of the MAIS Overall Tournament on Wednesday at Mississippi College. Felder went 7-of-11 from the floor and knocked down to 3-pointers while blocking one shot and making a steal.

The Simpson Academy Lady Cougars (31-7) used a 25-16 fourth quarter to overcome the Brookhaven Academy Lady Cougars (28-9) on Wednesday in the quarterfinals of the MAIS Overall State Tournament at Mississippi College. The Lady Cougars from Mendenhall shot a total of 38 free throws and made 28 in a 64-61 win to eliminate BA.
Brookhaven Academy went 9-of-10 from the free throw line.
Senior guard Jana Case led the Lady Cougar offense with 24 points in her final game. Freshman forward Emily Claire Felder had an outstanding outing as she went 7-of-11 from the floor and scored 16 points while grabbing eight rebounds.
Simpson led 18-15 after the first quarter, but BA held a slim 25-24 advantage at halftime. The Lady Cougars built that lead to 45-39 heading into the fourth quarter.
BA let it fly from the 3-point line as the Lady Cougars finished 8-of-23 from deep. Simpson only attempted nine 3-pointers with Alissa Grace Brewer making the only two converted by SA. Brewer scored a team high 24 points to lead Simpson.
The AAAA-Division 2 state champs, Simpson now moves on to face the winner of the Leake Academy and Manchester Academy game. Junior T.K. Catchings added 21 points and senior Morgan Griffith scored 17 points for Simpson.
Simpson is led by longtime coach Linda Dear. Dear won state championships at SA in 1993, 1996, and 1998. Dear spent years teaching and coaching elsewhere before returning to the Lady Cougars in 2016.
Sophomore Makayla Martin added nine points and nine rebounds for BA. Senior Macy Grace Smith scored six points for the Lady Cougars while freshmen Anne Brantley Smith and Madison Moak scored three points apiece. Martin and Warren handed out four assists apiece.
The Lady Cougars lose Case, Smith and Kristina Diamond to graduation off of an AA state runner-up team.
Warren, Felder and Moak will all be sophomores next season. Reserve guard Olivia Lewis will be a senior and Martin will be a junior. The junior high team finished 18-6 and won their district tournament.
“We had a great season,” said coach Jason Case. “The girls were fun to coach and really played hard down the stretch. I am extremely proud of all of them.”