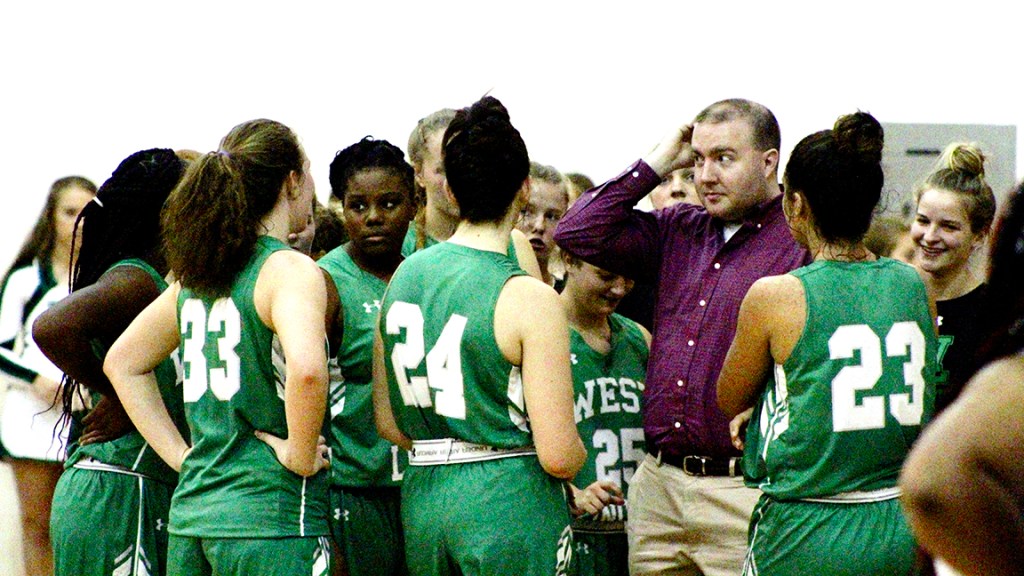 File Photo West Lincoln coach Brooks Smith talks to his team in a huddle during their season opening win at Wesson. The Lady Bears (23-5) take on Calhoun City on Tuesday at 9 a.m. in the MHSAA 2A State Tournament.

The West Lincoln Lady Bears won the tip against Wesson in their season opener in the Snake Pit on Nov. 6.

On an early possession senior forward Megan Gerald threw the ball to junior forward Bailey Wilson on the wing. Wilson threw it back and the Wesson zone shifted back up top to guard the 6-foot Gerald. Without looking Gerald whipped the ball back to the 6-foot Wilson who knocked down a 3-pointer to give WL a lead in a game they’d eventually win 62-31.

As Wilson and Gerald ran back down the court, long hair twisted into identical top-knots atop heads, they made eye contact and grinned. You could see they knew this season would be a lot fun.

Following a close win over the defending 4A state champion Lawrence County Lady Cougars (21-8) and a blowout victory over Salem, WL matched up with Puckett (29-3) in Jack Case Gymnasium in their fourth game of the season.

Puckett has become a perennial contender in 2A girls’ basketball and the game would serve as a litmus test for coach Brooks Smith and his team.

Smiles were few and far between that night though. If you zone Puckett, they screen the zone and shoot with confidence. If you try to guard them man-to-man, they go inside to a strong post player. Defensively they pick you up in three-quarter and half-court traps that can’t be broken without great communication among your ball handlers.

Smith wasn’t angry after the game — one his team lost 69-47. For him it was all about preparing them for the style of team they may see in the postseason. He mentioned the speed with which Collins had played the year before in eliminating WL from the postseason. That’s something you could not recreate in practice, he said. It had to come in game action.

The Bears bounced back to win the Lincoln County Tournament over their local rivals as they finished 3-0 in the tournament and won by an average of 34 points. Smith knew they’d see those teams against during region play and some again in the division tournament, he also knew that beating a team three or even four times in a row isn’t always the easiest task, even when you’re favored.

The next three games on the schedule were another testing ground for the Lady Bears. They played Mountain Brook (Alabama) the Saturday of the same week of the county tournament. Mountain Brook is coached by WL alum John London and the Lady Spartans are 7A members of the AHSAA. They reside in a very tough region that has traditional Alabama powers like Spain Park and Hewitt-Trussville.

Playing a school like Mountain Brook (16-13) that has over 1,000 students in grades 10-12 could only help toughen up the girls from Flea Hop. Mountain Brook jumped to an early lead and built on it in the third quarter, but a West Lincoln comeback in the final eight minutes saw the Bears outscore the Spartans 23-15 in the period before taking a close 58-55 loss.

Smith was encouraged by the play of sophomore forward Brittany Sturkey who scored a season high 19 points in the loss. If he could get that type of production from his top reserve, it would only make the WL offense stronger.

The next week there were two more games against bigger school for WL. A 71-49 loss to South Pike (18-9) — the worst of the season — and a 49-35 bounce back win over 5A North Pike. A few more wins easy wins over Cathedral and Salem and the Lady Bears took off a two week break for Christmas.

The post-Christmas round of region play began auspiciously for the green and white before tragedy struck the team in mid-January. After seeing her favorite team beat Enterprise 81-22 on January 15, Lady Bear super-fan Karen Adams was killed in a wreck on Hwy. 84.

Adams was the grandmother of Gerald and the mother of Lady Bear alums Karla Adams Gerald and Kala Adams.

Her love of the team, her granddaughter, and the children she supported like her own was woven into the fabric of that group. She followed them as one of its their fervent supporters.

A week later West Lincoln junior Brayden Anthony was involved in a single car accident that claimed his life as well.

The Lady Bears lost practice time to be with their grieving teammates and friends, but as often happens with teams, tragedy can bring a group together and strengthen their resolve and connections.

In a 62-39 win over Loyd Star after the funeral of Adams, the Lady Bears used a big second half to blow open a game that they trailed after the first quarter. You could see in their smiles and body language that being back on the court was freeing for the girls and their fans alike.

It wasn’t all rainbows and fairytales though. On Jan. 25 they lost 41-34 to Pelahatchie team they had beaten by 40 earlier in the season. Smith didn’t think his team was focused enough and took their opponent lightly after winning big against the same team earlier in the month.

On Feb. 5 the Loyd Star Lady Hornets (13-13) did what no other Region 7-2A team could this season as they knocked off WL 47-46 in the final week of the regular season.

On that night WL won what was essentially their first playoff game 39-32 against a gritty, game group of Bogue Chitto Lady Bobcats.

Throughout region play you heard rumblings and questions of how Amite County would be able to host the division tournament. The gym doesn’t have very many bleachers, but the real problem was the court. The Trojans are scheduled to get a new playing surface for next season. However, the one they have now was coming up as the season progressed.

The Friday before postseason play began the call was made to bypass Amite County and move the game to the next gym in the rotation of host sites, Jack Case Gymnasium on the campus of West Lincoln.

As luck would have it — counting the division tournament — the Lady Bears have won five straight postseason games — all on their home court.

Wins over Richton, Enterprise-Clarke, and Taylorsville have WL in the 2A state semifinals set for Tuesday at 9:00 a.m. in the Mississippi Coliseum.

The opponent awaiting them is a 30-1 Calhoun City Lady Wildcat team.

It’s the first appearance in the Big House for a Lady Bear team since the 2009-2010 team made it to the 1A state semifinals against Myrtle.

West Lincoln has looked like a team that’s talented enough to make it this far all season. They play to their strengths and share the basketball. Everyone looks comfortable in their own role.

Don’t expect them not to have fun on Tuesday morning.

And don’t expect for anyone to be left in Flea Hop either as the Coliseum will surely be awash in green and white.

Cliff Furr is the Sports Editor at The Daily Leader. He can be reached at sports@dailyleader.com.