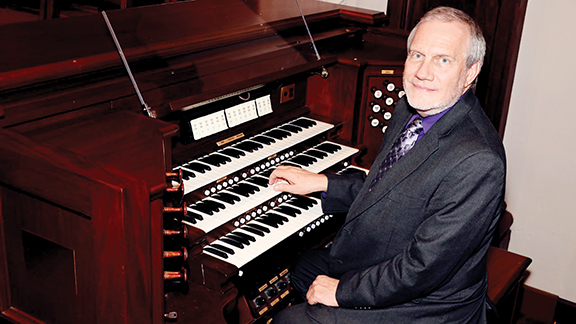 The famed Möller pipe organ that resides in a place of honor at the First United Methodist Church in Brookhaven is a grand old lady, last year marking her 90th birthday. For nearly a quarter of that time, she has bowed to the commands of but one man ­— Steve Russell.

On Sunday, Russell will celebrate his 25th anniversary serving as the church’s organ master and choir accompanist. The church will be celebrating this accomplishment with a special single worship service that day, at 10 a.m., in the sanctuary, with Russell at the keyboard, and a selection of his most beloved hymns, anthems and offertories highlighted. He will be joined by the church’s Chancel Choir and also the Copiah-Lincoln Community College Choir, for whom he is also an accompanist.

Russell came to First Methodist in 1994, after many years of playing for other churches, at Co-Lin, and a plethora of weddings, parties and other celebratory events.

“You know, it’s funny, someone I knew from the SPRC (Staff-Parish Relations Committee) contacted me and asked if I would be interested. At first, I said, ‘No,’ because I was already playing piano in another church, but then I thought about it, and thought it might be challenging to play the organ,” Russell said.

“I love it,” he explains. “I knew from the very first Sunday that this was where I was supposed to be.”

Although he had studied the organ during his undergraduate and master’s degree curriculum at Mississippi College, taking what he calls the one year of “obligatory” organ instruction, he wasn’t sure he was up to the task. Then, the church paid for him to have additional training at MC specifically in playing the organ. He’s never looked back.

“I love the organ because of the way that it can make the walls shake, and the way the hymns fill up the space with sound,” Russell explains.

Among the hymns that have inspired him is “Fairest Lord Jesus,” which is his absolute favorite, and will be among those included in the worship service’s lineup.

Russell, who has been playing piano since he was 8, graduated from Co-Lin High School (now Wesson High School), received his associate degree from Co-Lin then attended Mississippi College, where he garnered both bachelor’s and master’s degrees in piano performance.

In addition to his weekly organ and piano accompaniment on Sunday mornings at FUMC’s Wesley Service, he also is a piano instructor/staff accompanist at Co-Lin, where he accompanies the Co-Lin Choir, as well as any other ensembles, groups or soloists that need his assistance.

For 10 years he also accompanied students at the Mississippi School of the Arts, starting out as a volunteer, and then being hired to help part-time, but he found the demands of working at Co-Lin, MSA and the church to be too much.

“It was just too much. I was rushing to get from Co-Lin to MSA, and then trying to fit in my other students. It was just too, too much,” he says with a chuckle.

He currently teaches 36 piano students weekly – 19 at Co-Lin and 17 who are his private students.

But it is the church music that he finds to be the most challenging.

“One year we did the Easter portion of the ‘Messiah’ and it was very challenging. I did all the parts on the organ that are usually performed by an orchestra,” adding ruefully, “It worked, but I don’t know if I’d want to do it again.”

“It was one of the most challenging things I’ve ever done.”

In addition to his weekly duties at FUMC, Russell also serves as organist/pianist for two annual “camp meetings,” the 10-day Felder’s Campground Meeting in rural Pike County, and the week-long New Prospect event in Vancleave.

In addition to playing and tutoring young students, he also is involved with the Lincoln County Choral Society, providing accompaniment for them. He is also part of the MacDowell Music Club of Crystal Springs, which each year presents “A Grand Night,” where four grand pianos are used to perform a simultaneous concert, featuring as many as eight pianists at a time, along with the organ.

He’s presented numerous recitals, both solo and as an accompanist for groups, including performers entertaining Brookhaven’s Matinee Musicale.  “I like accompanying because it is more of a collaborative effort,” he said, adding, “I like that.”

And not one to rest on his laurels, Russell recently joined the Mississippi Chorus, as a singer. “It’s been a lot of fun,” explaining that the weekly practices in Jackson have allowed him to explore music from the other side of the keyboard.

His playlist for this special 25th Anniversary Worship Celebration includes what he describes as “old favorites of the congregation.”

The service will take place in the historic sanctuary, at the pipe organ that he has acted as caretaker of for the past 25 years, as well as the church’s piano. All are welcome to join the congregation, friends, family, former students and music lovers for this special celebration.