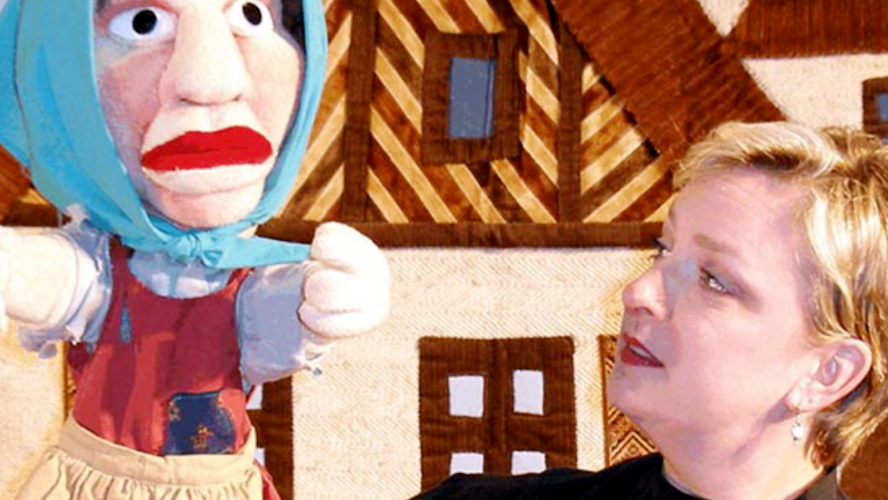 Photo submitted Professional actress and puppeteer T. J. McSparrin holds Katherina, the title character of “The Fisherman’s Wife,” which will be performed in two free shows Thursday in Rea Auditorium on Co-Lin’s campus.

Two performers have a handle on things for an upcoming fairytale play at Copiah-Lincoln Community College. They also have a hand inside.

They’re puppeteers with Puppet Arts Theatre, of Jackson, and will be presenting “The Fisherman and His Wife” Thursday in Rea Auditorium at 10 a.m. and again at 6 p.m. Admission is free, thanks to grants from the Mississippi Arts Commission, National Endowment for the Arts and the Greater Jackson Arts Council.

The well-known Brothers Grimm fairytale is a cautionary morality tale of a fisherman who releases a talking, golden fish he catches. The fish offers to grant him wishes, but he declines, saying he is satisfied with what he has.

But his wife is greedy and wishes for many things. The story has a surprising, satisfying ending.

Set to the music of composer Nikolai Rimsky-Korsakov, the play is performed on a set of two large, rotating towers. It is also performed in a unique way — with the puppeteers in full view of the audience, manipulating very large hand puppets. Children from the audience are asked to join the professional cast and perform with the puppets along with them.

Puppet Arts Theatre is based in Jackson and is a professional touring company under the direction of award-winning producer, puppeteer and animator Peter Zapletal. He holds a master’s degree in puppetry from the Academy for Performing Arts in Prague, Czech Republic. He is joined in these performances by professional actress and puppeteer T.J. McSparrin. Jarmila Zapletal, a professional puppet maker and designer, created the sets.

The company has been performing since 1968, and “The Fisherman’s Wife” is the most popular in their repertoire, said Peter Zapletal. They have performed it more than 260 times to date.