We were all made for a purpose 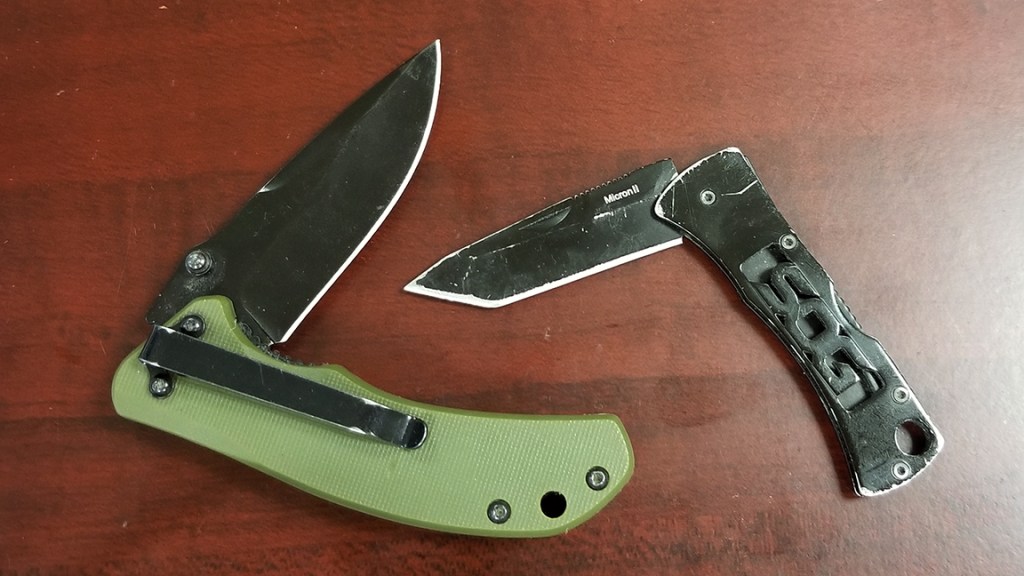 My pockets feel empty if I’m not carrying a pocket knife.

I’ve carried one nearly every day since I bought my first one more than 30 years ago. It was a three-bladed knife 3.5 inches long closed, with a scalloped bone handle and a shield in the side that had the Boy Scouts of America logo in relief on it. I purchased it on a scouting trip, along with a couple of wooden beginner carving kits, one of which was an owl.

I had whittled away the areas around the head of the owl when I slipped and discovered just how sharp that knife was.

I still have the scar on the first knuckle of my left forefinger to remind me.

Never did finish that owl.

Any given day I’ll have a knife on me. Today it’s an SOG Micron II black locking folder, 3 inches when closed, with a tanto blade. Tomorrow I may have a Case folder or a cheap no-name knife that nevertheless performs its job well.

I try to keep them clean and sharp.

I’ve had a couple of people who have used one of my knives and complained that they were “too sharp” and therefore dangerous. My response is that if you cut yourself with a sharp blade, you would have cut yourself with a duller one, too. But at least the sharp blade cuts smoothly, causing less damage often and resulting in less scarring.

Who wants to cut with a dull knife, anyway?

At one point I owned in excess of 200 knives, ranging from 1 to 13 inches in length, all types of blades, handles and designs. Each was unique, even though some were in a series and looked similar to one another. Some were received as gifts, I bought most, a few I found in the woods and some were inherited.

But each knife had a purpose.

Knives aren’t made to just be looked at, unless you’re looking to spend thousands of dollars on something lined with gold and jewels.

The true intent of a sharpened blade is its use as a cutting tool. Knives often have other features, as well, but the most basic uses are cutting, poking, slicing.

Yesterday, a friend needed a knife for a small task and realized he didn’t have one on him. I handed him my knife of the day and he utilized it and returned it.

If he had asked to borrow a knife, knowing I usually have one, and I told him that my knife was just to be looked at, not used, he would have probably looked at me like I was less than mentally competent. Rightfully so.

Take it a step further — if a knife had life and told its cutler, its maker, that it had no purpose or had a purpose other than that for which the craftsman created it, it would be foolish. It would be mocking its maker.

I was not created to sit and try to look pretty. For one, I would fail at that second part. But God made me to be his and to do good works in his name. You were made for the same purpose, too.

Trying to claim we are something else makes no real sense. We see the evidence of God’s existence all around us in the things that were created. It takes more faith to believe that all this came into being by chance than that there is a Creator.

If there is a Creator, the evidence then points toward the God of the Bible. Then we logically move to the truth of the message of the Bible, which is essentially that God loves his creation and wants a restored relationship with each human through his son Jesus. And once a person has been restored to a right relationship with his or her Creator, Scripture says we were created to do good works that were prepared for us long ago.

To sit idly by, then, and say that I have no purpose, or to rest on my laurels rather than do good for others in Jesus’ name, is to deny my purpose and mock my maker.

I may not be the sharpest tool in the shed, but I’m sharp enough to know I was made for a purpose.

So every time I touch the knife in my pocket I will be reminded that, like it, I was made to be useful.

Lifestyles editor Brett Campbell can be reached at brett.campbell@dailyleader.com or 601-265-5307.