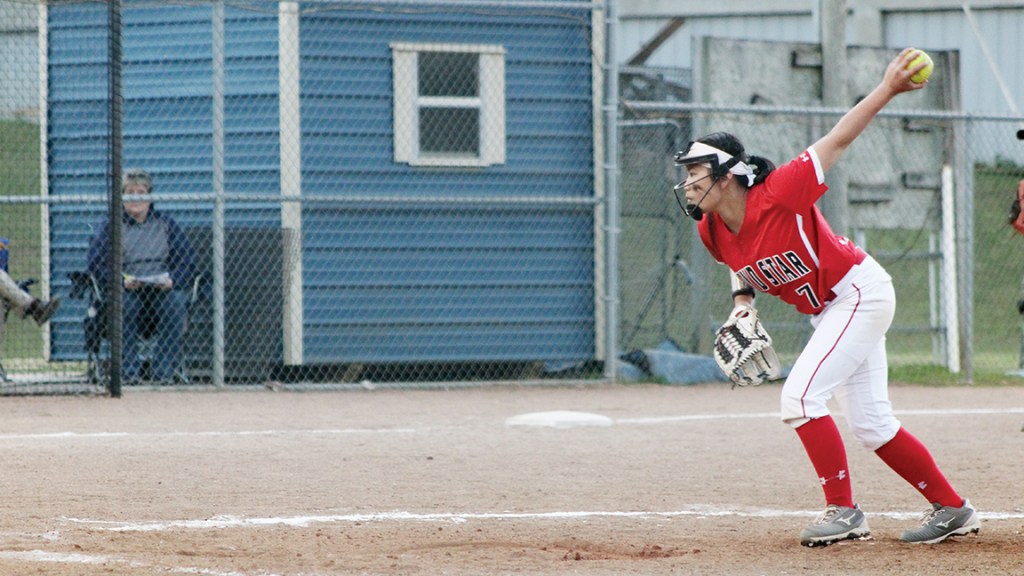 Photo by Cliff Furr Loyd Star eighth grade left-hander Carson Hughey prepares to deliver a pitch against Bogue Chitto on Tuesday. Hughey allowed only two hits in a 7-0 LS win. The two teams will meet again one week from today at Loyd Star.

Behind a stellar pitching performance from eighth grader Carson Hughey, the Loyd Star Lady Hornets (12-4) took control of Region 7-2A on Tuesday with a 7-0 road win over the Bogue Chitto Lady Bobcats (10-3-1).

The teams came in with identical 2-0 division records after both beating Enterprise and West Lincoln last week. You could hear longtime LS coach Jan Delaughter stressing to her team the importance of the game in her pregame talk as she wanted her team to start fast.

That’s exactly what happened when Loyd Star leadoff hitter Hughey began the game with a triple. The 5-foot-4 Hughey roped a hit that curved towards the foul line, hit in fair territory and then rolled all the way to the left-field fence.

Hughey then scored on a perfectly placed bunt by junior Malori Cade that ended with Cade safe at first. Cade then ended up at third after Meagan Poole hit a single that was misplayed by BC and put Poole at second base.

Loyd Star senior Johnna Norman — one of three Copiah-Lincoln signees in the game along with Karly Leake and Baleigh Jackson of Bogue Chitto — then ripped a hard-hit single that scored Cade and ended with Norman on second and Poole at third.

“We’ve swung the bat well all year and that’s something that we’ve really worked hard on,” said Delaughter. “Hitting the ball is something we’ve really stressed this season.”

Bogue Chitto got their first two outs of the inning on a double play that saw Jackson tag Poole out at the plate. Codi Leggett would then strike out Aly Floyd to end the inning and it felt like the Lady Bobcats had dodged a bullet after giving up only two runs in the first frame.

The Lady Cats had one of their best scoring opportunities in the bottom of the first, but with runners at first and third Huey forced a groundout to end the inning and subdue the threat.

A lefthander, Huey used her changeup to keep BC batters off balance all night.

“Carson pitched a great game,” said Delaughter. “She located well and had her change working.”

In the fourth Cade singled to centerfield and scored Aubrey Britt. In the fifth Floyd hit a double that scored Alyssa Leggett and Carly Beth Wallace to stretch the lead to 5-0. The final LS runs came in the sixth when Codi Leggett walked Alysaa Leggett with bases loaded to score Cade. Wallace then hit a sac fly that allowed Poole to tag up and score the final run of the game.

Hughey got the win by throwing 63 pitches and striking out one and walking one. The defense was solid behind her with Floyd in left field and Cade in centerfield tracking down every fly-ball hit their way and a defensive infield that played nearly flawless behind her.

The game was also the first time that the Lady Cats had faced their longtime head coach Scott Leggett. Leggett is in his first season assisting Delaughter after leading the BC program for 14 years.

Leggett won two-slow pitch titles and four fast-pitch state championships while building the Lady Cats into a dynasty along with his wife Denise. It was somewhat surreal to see him in the first base visitor’s dugout wearing the red and black of Loyd Star.

The two teams will meet again in one week at Loyd Star. The Lady Hornets play at Enterprise tonight at 6:30 p.m. and host Brookhaven High at 6:30 p.m. on Friday.

BC plays at West Lincoln tonight at 6 p.m. and then makes the long drive to Attala County on Friday for a 6 p.m. matchup with Ethel High School.