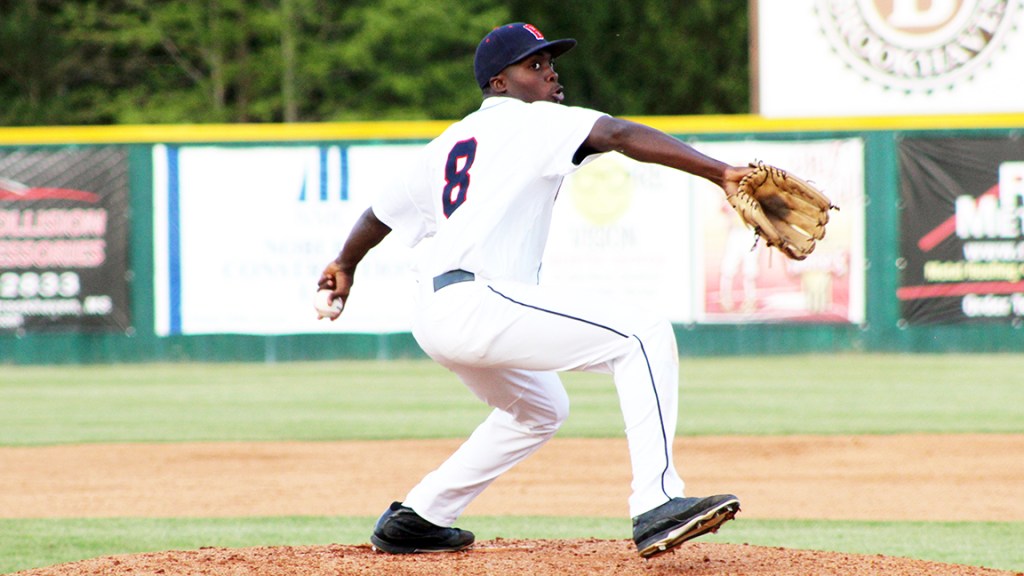 Photo by Cliff Furr Brookhaven High junior left-hander Byrion Robinson rares back to deliver a pitch in the second inning against Natchez. Robinson gave up five hits, three earned runs, and struck out eight in a 19-7 win.

The scoreboard on Moyer Field was lit up like a Christmas tree as the Brookhaven High (9-7-1) baseball team beat Natchez High 19-7 in a key Region 6-5A matchup Thursday night.

The Panthers didn’t score a touchdown and kick four field goal, but they did use seven runs in the bottom of the fourth inning to end the game early. Early as in it didn’t go a full seven innings, not early as in a short amount of time.

It wasn’t pretty, and it wasn’t conventional at times, but it’s a win that BHS coach Matt White will take.

“Credit to our kids for battling through and overcoming some early adversity,” said White. “They didn’t hang their head after they fell behind early, they kept fighting.”

Natchez (6-5) went up 5-0 after a frustrating top of the first inning for the home team. Brookhaven junior southpaw Byrion Robinson was on the hill and firing missiles. The problem was none of them were being called for strikes.

The first Natchez batter walked and then the next hit a shot off Robinson’s leg that got him aboard. Another walk loaded the bases and then a hard-hit chopper to third scored the first Natchez run. Another walk scored another run. An error cleared the bases to score three more runs as Natchez scored five runs before BHS could record an out. The Bulldogs sent nine runners to the plate in the inning as the full frame took over 30 minutes to complete.

The tight strike zone of the umpire had everyone guessing what a strike looked like as Robinson saw pitches grooved down the middle called as balls. BHS junior catcher Gatson Walker appeared to be confused on where to frame pitches. White walked a mile back in forth in front of the home dugout, ringing his hands, and hoping for a called strike.

BHS got two back in the second when Maney Miller hit a ball that was misplayed by Natchez and allowed Corbin Falvey to score. Robinson would score later in the inning when Jacob Smith was hit by a pitch with the bases loaded.

Robinson went three-up-three down in the second and began to settle in after that.

“Very proud of Byrion for not letting that start rattle him,” said White. “It’s not easy for a high school kid to make an adjustment like that, but he kept his head right and responded.”

BHS took the lead for good in the bottom of the second. Another hit batter with bases loaded plated another run. A Lane Smith hit to the shortstop caused another error and scored Falvey to make it 5-4. Miller walked in another run to tie the game and then a Sevante Quinn flyout to deep left foul territory scored Jacob Porter on a tag up.

Brookhaven only had three hits in the game as the runs piled up due to six Natchez errors, 13 walks, and seven hit batters. The biggest hit of the night came after the Quinn foul-out when Dylan Reeves roped a hit to left-center for a two-RBI single.

“On Tuesday Dylan went 0-3 with three strikeouts, but we stuck with him and tonight he came through,” said White. Reeves would single again later in the game and finish with three RBIs.

Natchez pulled close once more in the third when two runs pulled them within 8-7, but four runs in the bottom of the inning further extended the BHS lead.

Robinson only gave up three earned runs on five hits. He struck out eight, walked four, and hit two batters.

Porter is a Copiah-Lincoln signee and provides the power in the middle of the lineup with Smith. Quinn picked up the pitching win on Tuesday when BHS won at Natchez. Quinn recently signed with Co-Lin as well.

BHS still has one more game at Natchez on April 12. The Panthers and Bulldogs are joined in their three-team region by Forest Hill. The Panthers play at Forest Hill on Tuesday. They’ll host the Patriots for a doubleheader on Friday, April 5.

“Byrion being able to go the full game and finish things off tonight sets us up well rotation wise for next week,” said White.