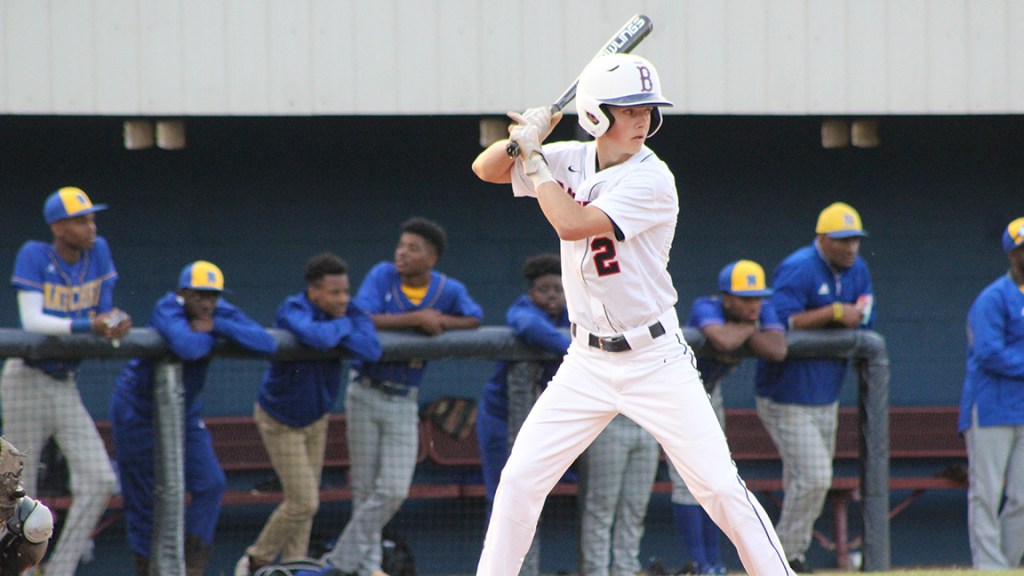 Photo by Cliff Furr Brookhaven freshman Maney Miller picked up the complete game, no-hit victory on the mound Tuesday as the Panthers needed just 1.5 innings to beat Forest Hill 26-0. Miller also hit a double and drove in a pair of runs.

Here is a look at how area teams fared in high school baseball action Tuesday night.

Brookhaven High School (9-7-1) needed an inning and a half on Tuesday to beat Forest Hill 26-0 in Region 6-5A action.

Maney Miller threw 12 pitches in the win as he struck out one and walked one to earn the complete game no-hitter.

Miller also hit a double and knocked in a pair of RBIs. Sevante Quinn went 3-for-3 at the plate with a double, triple and four RBIs. Jacob Porter and Lane Smith each had two hits each for coach Matt White. Corbin Falvey, Byrion Robinson, Darius Robinson, Gatson Walker and Sam Adcock also all hit safely for the Panthers.

The Panthers are scheduled to play the Patriots again on Friday for a doubleheader that begins at 5 p.m. on Moyer Field.

Caston Thompson nearly had a perfect game for Brookhaven Academy (8-7) Tuesday, but instead settled for a complete game no-hitter as the Cougars whipped Prentiss Christian 14-0 in Jefferson Davis County.

The win keeps BA at the top of the District 4-AA standings. The Cougars will host PCS (6-16-2) tonight at 6:30 p.m. at Williams-Gillis Ballpark.

The Cougars banged out 14 hits and the only Saint base-runner got aboard due to an error in the bottom of the fourth. Thompson struck out eight and walked none on 52 pitches. Nick Ogden and Brady Spring had a double apiece for coach Tyler Parvin and the BA offensive attack. Thompson had a team high three hits as Judson Griffin, Dawson Flowers, Ogden and Spring got a pair of hits each. Ogden drove in three runs while Spring, Griffin and Keegan Smith had two RBIs each. Cade Brown and Collin Waldrop also hit safely for BA.

Wesson (11-7) saw an early four run lead slip away as Seminary (9-6) scored two in the fifth and three in the sixth to take a 7-5 win in Copiah County.

Both teams committed two errors apiece and both posted eight hits each in the game. The win keeps Seminary at the top of the Region 8-3A standings with a 6-1 division record. Columbia and West Marion are both 5-2 and Wesson currently sits at 4-3.

Jim Guess got the Cobras started in the first with a leadoff single and would score later in the inning on a Kenner Bizot single. In the second Guess would hit an RBI single that would later be followed by a two-run RBI hit by Will McInnis that scored Colton Newman and Guess.

The Cobras travel to Covington County Friday for a second game against the Bulldogs for a 6:30 p.m. first pitch.

The Poplarville Hornets (16-5) used a six-run fourth inning to jump out to an 8-2 win over Lawrence County (9-6-1) Tuesday in Monticello.

The Cougars had held a 2-1 lead before the big inning by the visitors. Poplarville sits in second in the Region 7-4A standings with a 5-2 record. Sumrall is No. 1 at 6-1 and had their only lost against Greene County. Purvis is in third place at 4-3 and LC is in fourth place at 3-4.

John Clyde Ready gave up six earned runs on six hits in five innings for LC. He struck out two on 83 pitches.

The Cougars travel to Pearl River County for a rematch Friday at 7 p.m.