Ole Miss’ Davis to be among top 25 in coaching salary 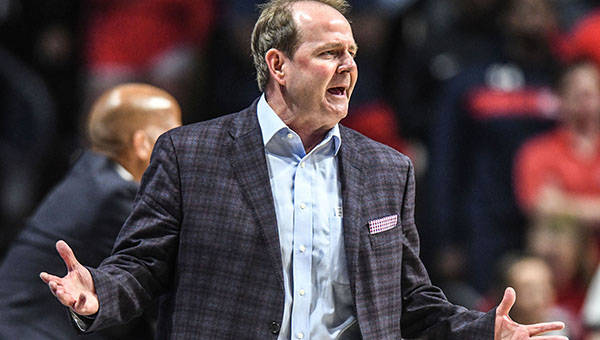 OXFORD — Ole Miss announced two weeks ago that it was agreeing to a new, four-year contract with men’s basketball coach Kermit Davis. On Thursday, the school released the details.

Davis’ base salary starts at $2.85 million in 2019, escalating to $3.15 million during year four, an average of $3 million per year over the course of the contract.

The contract makes Davis one of the 25 highest paid NCAA Division I men’s basketball coaches in the nation, according to the USA Today contract database.

In addition to the base compensation, the contract includes annual incentives tied to attendance numbers, conference wins, postseason play and awards.

If Ole Miss were to win the national championship, then, Davis could make nearly $1 million in bonuses. Davis also gets a $25,000 bonus if Ole Miss reaches the NIT Final Four or $50,000 if it wins that tournament.

In his first season as head coach, Davis led the Rebels to a 20-13 record and their first NCAA Tournament appearance since 2015. They lost to Oklahoma in the first round.

Also on Thursday, Ole Miss announced that it plans to extend the contract of women’s basketball coach Yolett McPhee-McCuin through 2023.

McPhee-McCuin also completed her first season with the program. The Rebels finished 9-22, but did increase their SEC win total and beat No. 16 Kentucky in January for their first road win against a ranked opponent since 2011.

“I can’t believe it’s been a year already,” McPhee-McCuin said in a statement. “I was extremely grateful for the opportunity last year, and to this date the feeling has not changed. I would like to thank (athletic director Ross Bjork) and Chancellor (Larry) Sparks for their vote of confidence in my staff and myself as we take the necessary steps to build this program back into a national brand. This year has not looked like success as far as wins and losses, but if you had a chance to watch us play this year it is evident that we are heading in the right direction. There is no doubt that with time and continued effort we will be a force to reckon with in the SEC.”